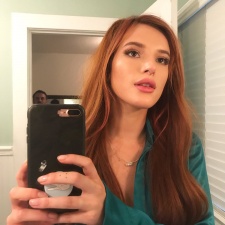 Imagine being able to buy a BMW M2 every time you post your dinner on Instagram? That sort of dream is a reality for actress and social media starlet Bella Thorne.

That's according to a recent Vogue documentary on Thorne's life and career. In the doc, she states that she earns up to $65,000 for a grid post (multiple photos in one post) on Instagram. She also nets a wild $10,000 to $20,000 for sponsored stories on her Insta and Snapchat accounts.

At that price, it's expected that Thorne will have an incredible following. The star boasts 17.5 million Instagram followers on Instagram, as well at seven million Twitter followers.

“I was raised to think that social media is everything,” Thorne says in the video. “Instagram is 100 per cent a job to me. I started out at 18 with literally $200 in my bank account, and I bought this house a year later - a year and a half - and it’s all from social media. It’s from studying that sh-t - demographics and ratios and engagement and definitely the more technical side of it.”

Check out the documentary below.