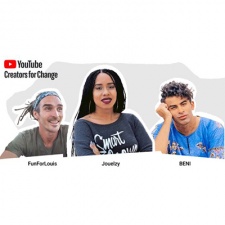 At a time when YouTube appears to be reverting back to a celebrity-led model, the company has announced a $5m injection into a creator initiative designed to spread positivity.

47 creators have been named, 31 of which are new to the program. They come from a geographically varied pot so as to better highlight pertinent issues on a more local level.

“Chosen for their passion and dedication to creating social change, these YouTube creators come from over 16 countries and represent a combined audience of 20 million fans.

“Over the next few months, the 2018 Creators for Change Ambassadors will kick off projects addressing hate speech, xenophobia and/or extremism through different creative forms… To the creators who are joining us as 2018 Ambassadors: thank you. We’re humbled to be working with you on sharing your messages of hope and tolerance.”

YouTube has not addressed criticism about the lack of visibility given to previous Creators for Change content, which paled in comparison to the millions of views more controversial figures would rack up.

Here’s the full list of creators (returning names are marked with *):