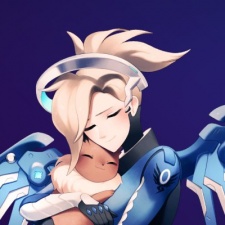 Update: Overtrack tweeted today that several Overtrack users were banned by Blizzard by mistake because of anti-cheat detection. The bans are currently being reversed.

According to their Twitter, EeveeA has been banned by Blizzard for using a third party app called Overtrack, a resource that tracks the map, result, heroes played and SR changes in Overwatch matches.

The app is designed to help competitive players refine their play. EeveeA is well known in the Overwatch community for being a top 500 Mercy main.

There are handfuls of apps and sites that track data from Overwatch games; Blizzard has never stipulated that using them is against their terms of service.

However, Overwatch streamer EvilToaster tweeted suggesting that Blizzard may be taking steps to deal with players that use these services.

EeveeA tweeted out that their account has been banned, but there was no indication of how long for. They also posted a photo of their Battle.net client being unable to launch Overwatch.

My account just got banned, for using an application that literally just takes screenshots of the game to track information of matches.