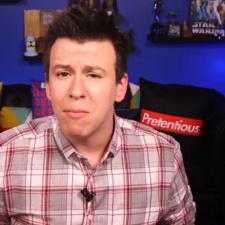 It goes by the name of DeFranco Now, and is available for free both as a website and iOS app, with an Android version to follow.

Not only does it allow DeFranco to post video content outside of YouTube but it also allows users to post replies in video form. These responses will then in turn be incorporated into the DeFranco Show proper.

DeFranco Now is a separate entity to the crowdfunded DeFranco Elite, which currently boasts over 16,000 patrons and offers assorted goodies and exclusive streams. Elite members will get additional DeFranco Now perks, however.

Social upstart Snakt, for which DeFranco serves as an advisor, is providing the underlying tech. Snakt is also working on a monetisation platform called SnaktCoins that will play a part in creator revenue generation.

“DeFranco Now is all about our amazing fan community and inviting them to be part of the show,” he said. “Creators need new partners now given what has happened with YouTube.

“I didn’t want to just upload monologues to the internet. I really wanted to start a dialogue. Of course, you can leave comments, but comments are just text, and video-to-video interaction, it’s just deeper, it’s better. When you can look into the eyes of the person you are having a back and forth with, it just matters more.”

DeFranco has been among the most vocal of YouTube’s critics, saying that the platform’s tightening of its ad revenue streams has hit his channel hard due to the often politically-charged subject matters he discusses.

“I am tired of trying to work with the alcoholic, negligent stepfather that is YouTube,” he recently said. “At this point, it really doesn’t matter if you’re swerving this car into a tree on purpose, or you’re just asleep at the wheel and that’s what happened.”