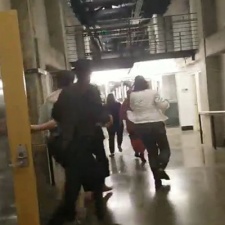 Streaming video personality ‘Arab Andy’ has been arrested after tracking a room full of people at a college campus that a bomb was about to go off.

Andy filmed himself walking into the room at the University of Washington and playing a pre-recorded message that stated “C4 has been successfully activated” and “bomb detonation countdown successfully started”, Gizmodo reports.

Washington police have since confirmed that there was no veracity to the threat, while also stating that Andy was arrested on charges of making a bomb threat. He also livestreamed the arrest, incidentally.

An alleged witness posted what is claimed to be an account of the incident on Reddit: “I was in the room when this occurred. The context here makes it look less real and intense than it was in person, because he entered the doorway and lingered in a very nervous and creepy way. He looked very uncomfortable at first.

“When he was asked if he was in the right place by Jerry (the faculty to his right), he said ‘I think so’ and smiled. Then the [message played]. His demeanor made it more real too, plus considering he had an oddly large backpack, a phone in hand, and electronics on the front of his body (circular speaker for the TTS).”

The video has since been removed by YouTube. Arab Andy has 10,000 followers split across two channels.

His video history is littered with similar incidents, including tricking people into believing they were hearing gunshots or that North Korea had launched a nuclear strike. He would ask for donations in return for pranks, most often involving the public playing of ‘text-to-speak’ messages.

For $3 viewers could buy a stream of him playing a message of a viewer’s choosing in a public place, while for $20 he would scream ‘Allahu Akbar’. The bomb threat prank cost just $4.20.