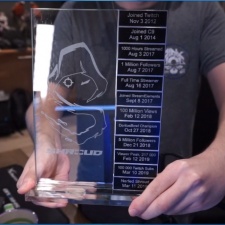 Top Twitch streamer Michael 'Shroud' Grzesiek, is being recognised for his work and accomplishments on the platform.

Instead of the recognition coming from Twitch itself, third-party stream service StreamElements is stepping up to honour the creator.

Grzesiek was awarded a plaque that marks the day he went full-time on Twitch, when he retired from professional CS: GO team Cloud9, and when he was hurt during a scooter accident in March 2019. Grzesiek showed his viewers the plaque on his stream earlier in the week.

Some of Grzesiek's other highlights are credited on the award, including his 100 million views mark, and gaining a cool 100,000 subscribers on Twitch.

His streams often rank in the top three most-watched channels on Twitch, competing with many other popular streamers, including Turner 'Tfue' Tenney and Tyler ''Ninja' Blevins. Keep an eye on the top Twitch channels in our weekly roundup here.

Grzesiek is also a keen ambassador and user of StreamElements' features. At the moment, its not yet known if StreamElements will do something similar with other top streamers who use their service, or if this was a one time deal