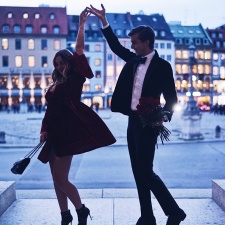 What happens when you take a pink-powered fashion blog and pair it with slick designer clothing for gentlemen? In this case, marketing success.

Munich-based luxury and lifestyle influencers The Pink Macaron have 132,000 followers on Instagram alone - which British menswear designer Hackett London cleverly tapped into with this December campaign.

Who's involved?
Influencer The Pink Macaron comprises of two best friends based in Munich. These are: The Brun Macaron (Sarah) and The Blond Macaron (Steph), who have separate Instagram accounts, but a shared blog. The pair focus on luxury fashion, globetrotting, and all things aesthetically pleasing (and pink).

Steph collaborated with British menswear brand Hackett London - which may seem a slightly odd match for a overtly feminine blog, but the creativity behind the pairing is actually very smart. The campaign involves in Steph’s model-like boyfriend and turns it into a Christmas gift guide - appealing to The Blond Macaron’s whopping Instagram following of aspirational fashion-forward women.

Purpose of campaign
Hackett London want to drive Christmas sales of its menswear, so need to appeal to those buying the presents for men: luxury-driven female customers.

Of course, the brand could directly target its primary audience using a high-profile male blogger, so extra creativity is needed to appeal to The Pink Macaron audience and generate sales.

The campaign also needed a clear call-to-action - to drive readers to the site to buy clothes for their man. But it was just as crucial that the content was an organic fit on the blog.

Process
The campaign comprised of a blog post and an Instagram post. The brief - a Hackett London gift guide targeted at women buying for partners at Christmas, presented as a luxury editorial-style photoshoot, with Steph and her boyfriend as models.

Within the piece, Steph shared secrets about her relationship and the clothes she was wearing. It’s most likely that Hackett London proposed the brief for the campaign and the influencers chose the clothes themselves, for an organic fit.

Throughout, buy-now links were easy to follow so that readers could purchase the clothes worn if they wanted them.

Analysis
The Pink Macaron absolutely boss it by both appealing to the target audience and generating sales for Hackett London seamlessly. The menswear brand get click-throughs directly to its products and readers can choose to purchase if they like what they see in the photoshoot.

Our mistrust for traditional advertisements generally means influencers must advertise without appearing to do so. But Steph has created a medium instantly recognisable to a luxury-loving audience, integrating the shoot with clearly isolated products to click and buy in a magazine-style format.

Outcome
This is a cleverly done campaign. Steph’s Instagram post alone had almost 7,000 likes, with more than 100 aspirational comments such as ‘perfect couple’, ‘couple goals’ and a deluge of heart-eyed emojis.

The format is familiar and the content is genuine, all while giving Hackett London straight-up sales and brand recognition to a huge luxury-loving audience looking to treat their partner at Christmas time. Win-win.

● Give the campaign something special, like a ‘first’. The Pink Macaron brilliantly weave Hackett London into a very organic narrative that appeals to their audience. For invested followers, it’s an experience worth participating in - Steph had promised the first couple’s shoot for weeks, building up a hype with fans who wanted to see ‘the man behind the camera’.

● Be open and human (and work with brands you love). By sandwiching the mention of the brand collab between an introduction to Steph’s boyfriend Mark and a list of their relationship secrets, Steph brings the brand into the post naturally while the reader is invested emotionally. Hackett London is Mark’s favourite clothing brand, which means the couple are genuinely enthusiastic about the clothing - and it shows.

● Absolutely smash it with visuals. Particularly on Instagram, the final picture you pluck for is everything. When the campaign went live, the promotional Insta-shot was captioned: ‘Almost the Tiffany moment’. It’s a stunning, romantic image which, on first glance, looks like a proposal. If there’s one thing a female, luxury-driven audience love, it’s a good proposal. Cleverly done.

Blogging outside your niche: how Rock n Roll Bride is taking marketing to the next level