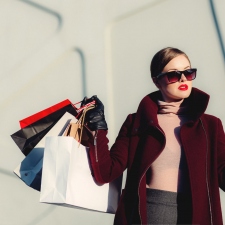 Marketing departments in the fashion industry are increasingly looking to work with micro influencers in favour of big-name and big-number celebrity social media stars.

That’s according to LaunchMetric’s ‘The State of Influencer Marketing in Fashion, Luxury & Cosmetics’ report.

As for what criteria influencers are selected by, 44.9 per cent cited quality of content. 31.8 per cent paid more attention to the engagement metrics and 15.1 per cent on the influencer’s personal expertise. Only 8.2 per cent felt the number of followers was the most important measure.

Also surprising was that 98 per cent of companies first engage with influencers by sending them gifts (or product samples, to use the industry parlance). There were still high numbers for other methods, however – social media outreach (90.5 per cent) and event invites (89.8 per cent) both ranked highly. 69.1 per cent held face-to-face meetings and only 51.5 per cent got influencers on the phone.

A snapshot of success

Instagram is by far the most popular platform for fashion influencer marketeers, perhaps thanks to its Shopping and Stories features. It was preferred by 35.8 per cent of respondents. This was followed by Facebook (16.3 per cent), YouTube (12.4 per cent), Twitter (8.6 per cent), Snapchat (5.6 per cent), LinkedIn (3.1 per cent) and Pinterest (three per cent). Instagram, Twitter and LinkedIn were the only platforms to show any annual gains, with Snapchat seeing a 4.4 per cent drop. One dreads to think what that may fall to this year if current trends continue.

A massive 89.6 per cent said that their influencer campaigns had succeeded in generating brand awareness, with 73.3 per cent saying that it was an effective way of developing customer loyalty.

Product launches remain the main reason why companies seek out influencers at 41.6 per cent. Promoting events was next up (28.1 per cent) followed by content promotions (24.5 per cent).

78 per cent had run influencer campaigns in 2017 – that’s a 13 per cent jump year-on-year. And over half of the 22 per cent who had not said this was purely due to budget constraints and 23 per cent because they lacked the means or resources to identify and manage influencer relationships.

For most companies, however, influencer spending still accounts for less than ten per cent of their overall marketing and communications budget, although this was down six per cent year-on-year. 36.7 per cent allocate between 10-30 per cent of their spend to influencers and only 5.1 per cent spend half or more of their budget. However, 60 per cent expect budget allocations to increase in the next year and only 4.5 per cent foresee a decrease.

Social media engagement remains the most valued KPI when it comes to measuring a campaign’s success at 25.8 per cent. 18.7 per cent paid more attention to web traffic increases and sales impact was rated highest by 18.2 per cent – that’s a big drop from the 23 per cent who primarily used that measure last year.

It’s no surprise then that at 35 per cent, social monitoring was the highest rated tool when it came to identifying and managing influencer relationships. 30.5 per cent used Google Alerts or other native platform tools. Both of these ranked higher than specific influencer marketing software, although this may not be the case come this time next year.

Regardless, identifying influencers was cited as the most challenging aspect of an influencer marketeer’s job at 29.6 per cent, while 28.5 per cent found measurement to be the biggest challenge, although this was down nearly 20 per cent year-on-year. 26.8 per cent cited content creation. Legal complications were only an issue for 6.4 per cent, which was down from 32 per cent last year.

27 per cent of respondents felt that money was the main motivator for most influencers working in the field, while 20 per cent felt they most valued exposure. 18.8 per cent felt they were in it for the freebies. The latter saw a big increase, jumping from six per cent in the previous year.

Only 12 per cent of companies will always pay influencer partners and 15.6 per cent never do. ‘Frequently’ was the most cited response at 29.1 per cent.

Interestingly, 66 per cent of influencers in the field still work other part-time or freelance jobs. The majority (65.3 per cent) have been generating content for three years or more. 59.3 per cent also work with 2-5 brands per month. 18.7 per cent work with one or less and 22 per cent with five or more. 55.3 per cent dedicate 15 hours or less a week to their channels.

At 82 per cent, sponsored channels are the most popular form of income for influencers. 84.7 per cent also said that sponsored posts remain the most suggested form of partnership. 76.2 per cent have enjoyed an increase in their influencer income in the last year. 46.3 per cent make less than $5,000 per year from their work while 11.2 per cent make $50,000 or more.

In contrast to the perception of marketeers, while 62.7 per cent cited money as their main motivator, 63.3 per cent said creating good content was the main reason for their influencer partnerships.

“In 2016, a total of 65 per cent of professionals claimed to have worked on influencer marketing campaigns. For this edition, we surveyed over 600 professionals in Europe and the United States throughout 2017 and this time 78 per cent admitted to working with opinion leaders. This 13 per cent increment is the resounding answer to our question: Is influencer marketing still evolving and growing? Yes,” Launchmetrics CEO Michael Jaïs said.

“Fashion, luxury and cosmetic brands still claim that their influencer marketing campaigns are most effective for generating brand awareness or boosting sales. The emergence of opinion leaders who are able to reach millions of people through their own social channels is not only part of the democratization phenomenon that the industry has been going through the last few years, but also a sign of how vital it is to tell brand stories and reach audiences in a different way.”

The future of influencer marketing

Blogging outside your niche: how Rock n Roll Bride is taking marketing to the next level