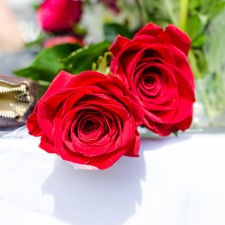 Let’s be honest - flowers have never really gone out of fashion. When Valentine’s Day swings round, a blushing bunch of roses is as traditional as a Sunday roast.

The question is - how can florists harness the power of influencers in 2019 and make the most of the busiest time of the year? It’s not like it’s a niché market. Get some garden-fresh ideas with a look at this campaign from floral powerhouses FTD flowers.

Who's involved?
Floral delivery service FTD Flowers are blooming on social this loved-up season. The US company has pulled out all the stops to promote its Valentine’s campaign, with a seemingly endless string of influencers sharing sponsored posts.

Purpose of campaign
We’re in an age of the celebrity florist. Floral stores now attract social media fans in their hundreds of thousands, so FTD Flowers wanted to get its brand name rippling throughout the Insta-world in a series of achingly pretty images, harnessed by fashion-forward influencers.

These influencers had to embody the Pinterest-perfect image: trendy, aesthetically pleasing and authentic. The latter especially, in order to build trust and loyalty towards both the influencer and the brand.

Each post had to include the FTD Flowers handle and hashtag, the further harness brand awareness and encourage other Instagram users to do the same. Many influencers also included a call-to-action, directing followers to an FTD link in their bio and directly driving traffic to Valentine’s products in the build-up to February 14th.

Process
The social stars were sent a bouquet of beautiful (and importantly - Instagrammable) flowers to photograph in their own unique style. The caption was also left to their own creative direction, only Valentine’s Day (as well as the branded handle and hashtag) had to be mentioned.

Each post is professionally and legally executed - there’s no doubt that these are sponsored posts, thanks to #sponsored or #ad included in every caption.

Analysis
The influencers picked out aren’t swimming in hundreds of thousands of followers - but it doesn’t matter. By choosing a diverse mix of real and relatable personalities, FTD were able to reach a range of smaller, more loyal fans.

The followers of motherhood blogger Embracing Chaos, for example, aren’t going to be the same as travel and fashion influencer Allison Lach. Had the brand splurged on a huge social celebrity with millions of followers, the majority of their budget would have been risked on one singular audience.

To reach an even more diverse audience, influencers used their own stories to take flowers beyond the romance bracket. For example, one recommended celebrating yourself with a bouquet self-treat, while another posted she was buying a beautiful bunch for friends as a Galentine’s gift.

The social stars whittled down for this Valentine’s campaign did a lovely job of engaging their target audience and generating sales for FTD - whether through encouraging people to buy flowers via links directly or simply getting the brand name seen. Here are just a few of the outcomes:

It’s always best to give influencers at least a little creative freedom, but stick to one theme for your message. This was exactly the case here - blending seasonal messages with stunning imagery from a range of trusted influencers - and it led to an engaging and creative campaign.