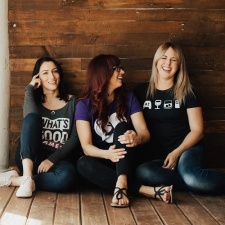 At Apple’s Worldwide Developers Conference, the phone giant confirmed that over 550,000 different podcasts were currently available across its platform.

Taking into account the likes of Spotify and the number rises to over 750,000. Though there is a good chunk of the population that are not well-versed in the nature of a podcast, it’s estimated that 50 per cent of households in the US consider themselves fans of the genre, according to Podcast Insights.

In the video games sphere, this can be a dime a dozen with numerous creators talking about their favourite subject episodically. With so many differing opinions and personalities, making a name for yourself and your podcast can be an uphill battle.

What does help with this factor is having an already built-in audience, alongside 30 plus years of experience on the topic. That’s where Andrea Rene, Kristine Steimer and Brittney Brombacher of What’s Good Games come in.

Anybody who works in podcasting will tell you that it’s a challenge from a PR and marketing perspective.

Since launching in May 2017, WGG has been creating weekly podcasts discussing everything in the world of video games, utilising the trio’s long career including IGN, Yahoo, PlayStation, CD Projekt Red, GameSpot and more.

Alongside hosting, Rene acts as director operations and executive producer, Brombacher handles all of the community aspects and Steimer maintains another full-time role in the industry.

Accumulating over 80,000 Facebook followers, 26,000 YouTube subscriptions and over 1,400 Patreons isn’t something that can be done overnight. During only their second month, the team even managed to partner with Facebook at E3.

During a visit to the UK where the group held a ‘meet-and-greet’ in London, we caught up with Rene and Steimer as the group celebrated its second anniversary to discuss the ups and downs of the past two years, as well as how the trio never want to be seen as just another “girl gamer podcast”.

“The biggest challenges, in the beginning, were certainly a lot of technical and production issues for us learning how to make the show every week,” Rene tells InfluencerUpdate.Biz.

“I have an extensive background in digital video but I’d never made an audio podcast before, so learning the ins and outs of audio engineering was something I had never anticipated that I would need to know in my circle of experience.

“The other thing that we found really challenging was communicating to our colleagues in the industry who knew who we were about what we’re doing now, what WGG is and what the world of podcasting looks like. Anybody who works in podcasting will tell you that it’s a challenge from a PR and marketing perspective to really communicate effectively about what a podcast is… which is kinda crazy as podcasting has been around for a long time now.

“People forget or don’t realise that it’s as large as it is today, with hundreds of millions of listeners around the globe. The engagement levels surpass most digital videos and really the closeness that you get with your audience, the more of an intimate relationship you have with the people that follow your work in other forms of media.”

YouTube is the smallest portion of our audience... the podcast is the bread and butter for us and YouTube is a little bit of sea salt.

Steimer adds: “It’s interesting that you said that about people not really understanding podcasting.

“Because I was even talking with a developer friend of ours the other day and he was like ‘what do you mean there’s an audio-only version - it’s not just YouTube?’ YouTube is the smallest portion of our audience, so he was surprised by that. The podcast is the bread and butter for us and YouTube is a little bit of sea salt.”

An obvious trait that is brought up constantly is the fact that the hosts are all women. In an industry that is seeing more female representation but still has a long way to go, the three podcasters don’t simply want to be known for their gender, but appreciate that representation is important.

“When we launched WGG, one of the things that we all agreed on was that we didn’t want to bill ourselves as a girl gamer podcast,” states Rene.

“There’s nothing wrong with billing yourself as the ‘girl gamers’ but we really wanted to make sure that people were coming to WGG because of the extensive industry experience that we all brought to the table, that combines 30 plus years of working professionally in the world of the video games business.

Representation has been a long hard battle that is still ongoing to this day. Another tough conversation in the games industry, which recently became a hot topic was surrounding accessibility. The WGG crew are very much an advocate for the more accessibility options, the better – even going as far as to include one of the firm’s slogan “Baby-Ass Baby Mode” on a t-shirt.

“I always pivot back to Steven Spohn who is the COO of AbleGamers,” says Rene.

“I sit on their advisory board so I help them with media issues from time to time. I think what’s really great about where we're moving towards is that more developers and publishers are addressing the issue of accessibility and not necessarily looking at it as a creative choice but more of a way to bring more people into the fold…

She continues: “I’m glad there are people like Steven who are willing to take a bullet for the rest of us by being out there on social media.”

“Having those tough conversations with people who are, quite frankly, behaving really disgusting, immature, sad and disappointing ways. It’s a conversation we really should be able to have in 2019.”

Having these tough conversations is a major part of why the trio assembled and why YouTube was chosen because of its potential reach. However, during the time of the ’adpocalypse’, and with over 25,000 subscribers with views averaging between 5,000 to 15,000, it’s still strenuous for content creators to earn revenue through the platform, with the bulk of WGG income brought in from Patreon and side-projects.

“YouTube makes next to no money for us,” says Rene.

“Maybe a couple of hundred dollars a year which is clearly not enough to pay even part of our monthly hosting fees for our website. YouTube has become a really challenging place for small to medium-sized creators. Even large creators suffer to make revenue because of the way it’s changed not only its algorithm but also their advertising parameters, for lack of a better word.

“It’s really challenging from a creator standpoint because there are so many times when we have to be really cognizant of content we are putting in the show or potentially face a falsely filed copyright or content ID claim.

YouTube has no love for creators that aren’t in the 10 million subscribers-plus club – they won’t even give you the time of day,

She adds: “YouTube has no love for creators that aren’t in the 10 million subscribers-plus club – they won’t even give you the time of day - it’s incredibly frustrating.”

“Does that mean we’re abandoning YouTube as a platform? Absolutely not. It’s such a powerful tool from an SEO perspective, clearly built on the Google search engine that it can help people find out show that maybe wouldn’t have found it otherwise. I always encourage smaller, new creators to utilise it, particularly because hosting your own video is wildly expensive.”

This can be very discouraging for a lot of newcomers. Not to mention those that have managed to obtain an audience will work long hours to sustain it, resulting in heavy burnout for some.

“Anyone that runs a YouTube or Twitch channel will tell you the same thing: You have to work day in and day out, 10 to 15-hour days to make it happen. It’s not this glamorous lifestyle that people think it is that we play video games all day then record the show, then go back to playing video games.

“No, 80 or 90 per cent of this job is the grunt work of answering emails, rendering files, data management, metadata writing, making thumbnails and all the other work that gets shared around when you work in an office place.”

Rene takes a moment before recounting the reason why WGG believes it’s worth doing:

“But, we do it because people will write in and talk about how much the show means to them or how it changed their life or the impact it had on their relationships, and that means everything to us.”