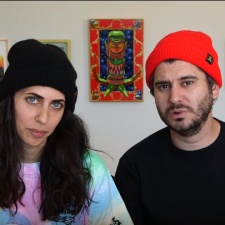 YouTube channel H3H3 has broken a hiatus with a new update video.

The channel, run by creators Ethan and Hila Klein, had been quiet for over three months. The last video to be uploaded was on June 8th.

Ethan Klein says the break was brought on by a "string of really difficult to handle events". The video goes on to explain that Hila's father recently lost a battle with cancer, and that the pair were out in Israel visiting family. Ethan also goes in to detail about his struggles with anxiety and depression.

"I have just accepted that I am actually depressed. Confronting that was hard because I always felt like it was a weakness." Ethan says in the video.

Despite the channel hiatus, the H3H3 podcast continued to air regularly. The pair also want to get back to making regular YouTube content and assure fans that they hope to have a video up next week.

H3H3 Productions released a trailer for their new mobile game this week, titled Ball Rider. The release was met wirh criticism, accusing the pair of cashing out on a game and giving up on YouTube.

Ethan Klein responded to criticism via Twitter, saying that the game's developer, Outerminds, had been working on Ball Rider for a year and a half and he didn't want to halt the release of the game.