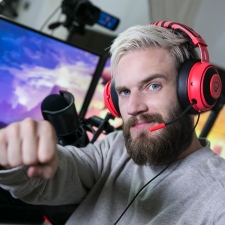 This week, YouTube leader and gaming extraordinaire Felix Kjellberg (AKA PewDiePie) announced the release of his very own personalised gaming headset.

The headset is made by Razer, and is a fully customised version of the existing Kraken Pro V2 headset, a popular peripheral in the gaming space. Although Felix is known for using Razer headsets, this is his first collaboration with the company.

"7 years ago I bought a pair of Razer headphones to start off my YouTube channel. It's unreal to be here and announce my very own." Felix said on Twitter.

The PewDiePie Razer Kraken Pro V2 boasts a louder and richer soundstage than ever before, so you’ll feel like you’re in the room with Felix as he yells his way through his favourite games. The headset has also been redesigned to maximise comfort and reduce clamping force sessions during those long gaming sessions.

The PewDiePie model comes in an awesomely garish red and black patterned finish inspired by Kjellberg's branding, and features his signature 'Brofist' logo on the earpiece.

Felix announced the release of the headset with a YouTube video.

The PewdiePie Razer Kraken Pro V2 is available to now available for purchase from the Razer website.