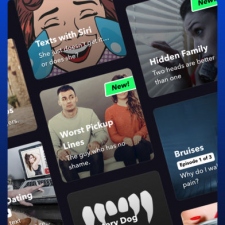 Chat fiction – stories delivered as streams of fictional text messages – has quietly become a big deal for many teenage smartphone owners. Now it's a big deal for investors too.

One of the leading companies in the space, Mammoth Media, has raised a $13m funding round to continue developing its chat-fiction app Yarn, as well as its social polls app Wishbone.

"Yarn started with stories told through simple text message threads, and have evolved to a rich new storytelling format including video, 'live streaming', and more to tell the story," wrote Elman in a blog post announcing the news.

"Users can subscribe on a weekly or monthly basis to access the catalog of stories within Yarn — similar to subscribing to Netflix or HBO."

Elman added that 1.6m story episodes are currently read on Yarn every week, including 7.5bn messages.

What has this got to do with influencers? Apps like Yarn are creating their own communities of influential creators, but the new formats that Elman referred to are also providing opportunities for social stars from other platforms.