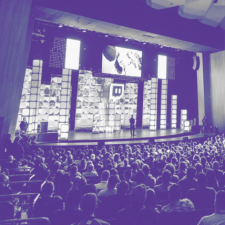 Twitch had announced updates to its community guidelines, all of which will go into effect on February 19th at 9am PT.

An anti-harassment and hateful conduct policy has been enforced to ensure that all Twitch streamers feel welcome on the platform.

Any content deemed hateful will result in an immediate and "indefinite" suspension. The platform will now also "consider verifiable or harassing conduct that takes place off-Twitch when making moderation decisions for actions that occur on Twitch."

This means that a creator's conduct on other mediums could affect their status on Twitch.

Twitch is also aiming to combat sexual harassment on the platform, as well as addressing content that may be deemed sexual.

"We’re updating our moderation framework to review your conduct in its entirety when evaluating if the intent is to be sexually suggestive." Twitch stated in a blog post.

"We’ll be looking at contextual elements such as the stream title, camera angles, emotes, panels, attire, overlays, and chat moderation. Offering access to prohibited sexual content such as “lewds” on Twitch remains prohibited."

"Attire in gaming streams, most at-home streams, and all profile/channel imagery should be appropriate for a public street, mall, or restaurant. As a reminder, we will not tolerate using this policy as a basis to harass streamers on or off Twitch, regardless of whether you think they’re breaking this rule."

The old guidelines will remain in use until the stated date, but all clips and VODs that violate Twitch's new rules will have to be removed entirely or the streamer could face consequences, even if they date back to before the changes.

"During the transition period, we'll be reaching out to some streamers whose current and past content may violate these new guidelines to help you be successful on Twitch," the company wrote in a statement.

"Our goal is to ensure everyone understands and adheres to the updated community guidelines so you can keep creating content for your communities."