Fortnite is contributing to a swelling clickbait problem on YouTube 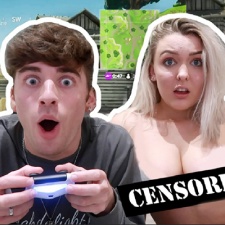 Let’s start by saying that the term ‘clickbait’ is among one of the most misunderstood and abused in the modern world. All headlines want to be clicked, as anyone who ever publishes anything online wants it to be read. It is designed to be interesting. All online content is, by default, clickbait.

At the same time, there are times when the term clickbait is completely apt. And a video entitled ‘1 Kill = Remove 1 Clothing With My 13-Year-Old Sister’ probably falls into that category.

And yes, that was the name of a video that was actually published on YouTube. However, Polygon reports that the short, by YouTuber hopeful Carmie Sellitto, in fact features fellow YouTuber Millie T who is not his sister and definitely not 13. And has since been removed.

Sellitto has made a habit of baiting in viewers with the promise of content that never actually materialises, be it stripping girls, fights that never happen or, in one instance, even claiming to discover his brother’s suicide note. It is really quite astonishingly cynical.

“I’m literally just a boy talking to my camera trying to make a few clickbait videos, trying to get my name out there,” he confesses. “My name’s kind of out there now, but probably not for a good reason ... My humour is so messed up to the point where I didn’t know where to stop, like I literally don’t have any limits to clickbait, clearly.”

The aforementioned video ties in to what is being called the ‘Strip Fortnite’ craze, where people use the promise of increasing undress to lure viewers in. And plenty of creators are at it.

Thus we reach the consequence of an economy driven by clicks and revenue as opposed to quality, morality or the desire to create. Although these trends are not going unnoticed, at least.

Fortnite itself has become a go-to resource for YouTubers to tap into. As pointed out by Forbes, a search for the game’s name on YouTube, 49 out of the top 120 results all come from UK creator Ali-A, who has clearly cottoned on the numbers attached to any Fortnite content and knows how to play the system and rinse those search results.

You arguably cannot blame Ali-A, or any YouTuber, for following the numbers. For many that is fundamentally what they are in the game for. But it does demonstrate that YouTube’s algorithms can be easily played, and that in itself is definitely an issue.