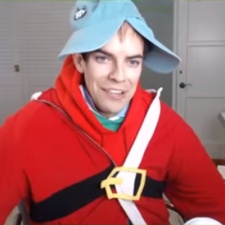 If you’ve spent any length of time on YouTube lately you’re likely very aware of the Fortnite spam problem that it clogging up plenty of user’s feeds.

You’ll also probably be quite amused by Jacksfilms’ latest video which enjoys a not-so-subtle dig at one of the most harmful types of Fortnite clickbait - strip Fortnite. These videos lure viewers in with the promise of nudity, typically with items of clothes being shed for each kill.

Jacksfilms turns this on its head by adding a layer of clothing every time he dies.

“Does anyone else think it’s sad and a little pathetic that some youtubers need to objectify women just for views?” he says, whilst donning what appears to be a second or third hat.

Of course, not all is pure as the video ends with an extensive add for the YouTuber’s clothes and merch line.

YouTube’s Fortnite clickbait can get pretty grim. Last month InfluencerUpdate reported on a video entitled ‘1 Kill = Remove 1 Clothing With My 13-Year-Old Sister’. Yes, that was the name of a video that was actually published on YouTube.

As it transpires, the video by YouTuber hopeful Carmie Sellitto in fact features fellow YouTuber Millie T who is not his sister and definitely not 13. And has since been removed.

“I’m literally just a boy talking to my camera trying to make a few clickbait videos, trying to get my name out there,” Sellitto confessed. “My name’s kind of out there now, but probably not for a good reason ... My humour is so messed up to the point where I didn’t know where to stop, like I literally don’t have any limits to clickbait, clearly.”

Fortnite is contributing to a swelling clickbait problem on YouTube