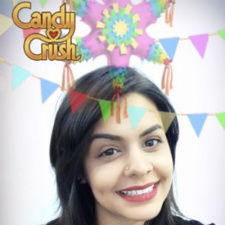 Advertisers will from this week be able to cajole Snapchat users to buy their goods more directly.

TechCrunch reports that Snapchat is introducing Shoppable AR, which piggybacks the existing Sponsored Lenses service that encourages users to take selfies emblazoned with promotional branding. The new feature allows advertisers to embed hyperlink buttons directly into a lens, through which users can purchase associated goods.

Alternatively, brands will be able to embed video or other content into a lens, all of which can be viewed within the app itself. Advertisers will not have to pay any additional fees to use the new features.

Life through a lens

This follows the recent news that Snap is expanding its developer platform to let creators build their own AR face filters. This builds upon the existing Lens Studio platform that allowed for the creation of AR objects. Also new is Giphy integration which will allow animated gifs to be integrated into lenses.

Over 30,000 lenses were created in the first two months of the service. Snap promotes commercially created lenses via Stories, while community lenses are highlighted in the Discover tab. Top creators, meanwhile, will be offered a place in an Official Creator Program that grants additional promotion, tech support and early access to new features.

Around 70m use Snapchat’s Lens feature each day.