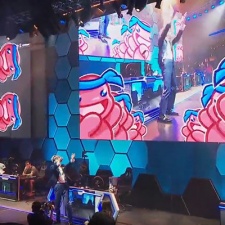 At its peak the stream hit somewhere between 660,000 and 680,000, according to assorted reported numbers, beating the record previously held by Ninja’s famous game with rapper Drake. The stream consistently had over 500,000 viewers throughout.

The event itself had a 700-person strong live audience at the Esports Arena Las Vegas at the Luxor Hotel. Commentating duties were handled by Jack ‘CouRage’ Dunlop and Twitch streamer DrLupo, while Ninja’s wife Jessica Goch did much of the hosting and interviewing.

Eyes on the prize

Players won $2,500 a piece each time they eliminated Ninja or won a match, while Ninja’s winnings – which were limited to a single victory inn the first game – were donated to the Alzheimer’s Association.

In total some $50,000 was dished out to contestants. Winners included upcoming Fortnite star Blind and the relatively unknown 4DRStormYT, who it transpired upon his collection of a prize is aged just 14.

If there was one disappointment it was probably the relatively bad performance of fellow Fortnite star Myth, whose appearance on the stream gave the numbers the bump needed push the it to the record number. The much craved-for Ninja v Myth 1v1 finish sadly never materialised.

It will be interesting to see whether other streaming stars try and bring their popularity to the live event sector, and indeed whether game publishers themselves try and mimic the model.