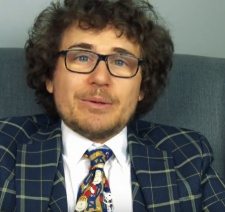 Last night YouTube gamer, writer and funnyman Dan 'NerdCubed' Hardcastle had the pleasure of giving the world its first look at gameplay from Just Cause 4.

Working together with Square Enix, the creator had the opportunity to debut footage from the title before anyone else, during E3's Just Cause 4 blowout showcase.

Hardcastle made a short video to introduce himself to the E3 crowds and his video, before rolling a pre-recorded letsplay of alpha footage from Just Cause 4.

The collaboration was not a paid one - Hardcastle is a long term fan of the Just Cause series and hopped on to the opportunity out of sheer excitement.

"Dan is the biggest Just Cause fan I know. When Square Enix sent us the email offering to let him play the game early, you would not believe how incredibly excited he was," NerdCubed COO Matt Collins told InfluencerUpdate.biz.

"We had full creative control over the video, Square Enix just got final approval on the video to make sure we didn't show anything that was really unfinished.

"I think his [Dan's] genuine love and passion for Just Cause, as well as his endless creativity makes him the perfect person to do the straight gameplay reveal of Just Cause 4. All the excitement and fun you hear in his voice during the video is entirely genuine, I'm so glad he got to show off the game in the best way possible!"

The video can be seen over on NerdCubed's YouTube channel.