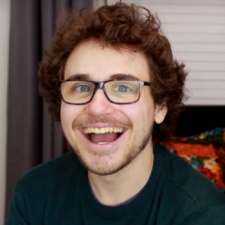 Daniel Hardcastle, known online as NerdCubed, has announced a release date and a tour to promote his debut book titled 'F**k Yeah, Video Games: The Life and Extra Lives of a Professional Nerd'.

Written by Hardcastle and illustrated by Rebecca Maughan, the book celebrates “the brilliance of video games in a warm and whimsical manner”.

The book will also contain a section written by YouTube creator Stuart Ashen, and a foreword written by Double Fine founder Tim Schafer.

Published through book-funding platform Unbound, the book broke records during its crowdfunding period, raising 1893 per cent of the estimated completion fund. The project was 100 per cent funded in 42 minutes.

The tour will begin in Edinburgh on September 15th and conclude in London on September 21st at Forbidden Planet. A full list of dates and venues is available on Hardcastle's Twitter.

In an announcement video, Hardcastle discussed how his YouTube career began at the Forbidden Planet, “where Edgar Wright was doing a signing, and now I’m going to do a signing there, oh it’s like the circle of life, only I've written a book with the word f*** in the title, and he’s directed some of the best films ever made,"

Expressing his excitement, he continues: “it doesn’t feel real yet, because I don’t have it in my hands”, though joked expecting to “see a f****** misprint, but that’ll be fine, I won’t be crying a lot.”

Chief operating officer for NerdCubed Matt Collins also clarified via Twitter that the signings are all free to attend.

Collins added that the length of the signings will last until every person has been seen, and readers can bring “preferably a book as it’s a book tour, but you’re welcome to get something else signed!”