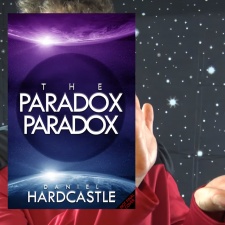 YouTuber and best-selling author Daniel 'Nerdcubed' Hardcastle has unveiled a crowdfunding project for his next book.

The book, titled 'The Paradox Paradox', has been revealed via book funding platform Unbound. It is the second title Hardcastle has announced via the platform. The book is described as a "dark sci'fi comedy set hundreds of years in the future".

The project went live on Unbound's website at 4pm on the 26th September. It hit 100 per cent in just 20 minutes, and is 140 per cent funded as of writing. Hardcastle also announced the book on his YouTube channel.

There's no set release date for The Paradox Paradox yet, but the book's Unbound page states it'll come out in 2021.

THE SECOND NERD³ BOOK: THE PARADOX PARADOX - BACK IT NOW! https://t.co/2kTS25WnQd pic.twitter.com/sdm5UQE5I9

Hardcastle's first book, 'Fuck Yeah: Video Games: The Lives and Extra Lives of a Professional Nerd', released on September 19th. It was first listed on Unbound on June 2018, and the project raised 100 per cent of its funding goal in just 42 minutes. It is currently the most crowd-funded UK book of all time.

The book has also made its way on to the Sunday Times' Bestseller's list, entering at number five. Hardcastle has also just concluded a UK book tour.

While he now dons the impressive accolade of 'bestselling author' Hardcastle is better known from his YouTube channel, NerdCubed. He has amassed over 2.5 million subscribers and also streams regularly on his Twitch channel of the same name.