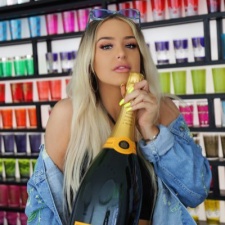 An impromptu fan event organised by YouTube Tana Mongeau was forced to close after an unexpectedly high number of people tried to attend.

Polygon reports that over 20,000 fans tried to access the shindig, which was staged as an alternative to VidCon and took place just down the road from the high-profile gathering. It came about following a disagreement between Mengeau and Vidcon organisers concerning her status at the event.

“Just got word that there are literally 20,000 people outside right now. VidCon was expecting 30,000. That's absolutely insane, and I'm so overwhelmed by that kind of support,” Mongeau tweeted in the early stages. However, things quickly got out of hand.

“Sending hundreds of employees outside to separate the crowd from people with tickets already and people without to get as many people inside as possible.” She later added: “100% it's my first convention and obviously we aren't ran by a giant corporation and NO ONE EXPECTED 15,000 unticketed guests to show up and rush!”

Attendees soon took to social media to complain about a lack of organisation and long waits to try and get tickets. Refunds are now being offered to anyone who bought a ticket.

“My intentions with Tanacon were incredibly pure and I truly thought that I had everything on lock,” Mengeau tweeted after the saga came to an end. “I didn't expect that many people to show up outside. Which in hindsight was dumb as fuck. It was the same days as VidCon and I should've prepared better. Regardless of if people were telling me different, TanaCon is attached to ME and I take full responsibility.

“I am so grateful that the beginning of TanaCon was incredible inside. Inclusivity, people meeting their favs etc. but that doesn't excuse what was happening outside. Which is why we shut it down. I am heartbroken to have postponed today however I would've been more heartbroken if I let that security mess continue.

“I truly apologize for not executing it better. Planning a convention for the first time in a few months was the most impulsive thing I've ever done. I refuse to give up on this but I still will be held accountable and take full blame.”

VidCon had already warned creators about the danger of organising their own fan gatherings.