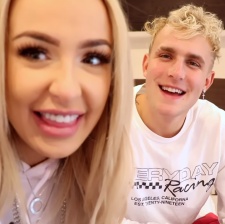 YouTuber Tana Mongeau has addressed speculation that her wedding to Jake Paul may be fake after episodes of an MTV episode suggest the event was "for content".

Following the wedding in Las Vegas on July 29, Monegeau was heard in an episode of Tana Turns 21 discussing the wedding before it happened. In the show, the 21 year old referred to the wedding saying “we've just been kind of playing it up”.

“Because at the end of the day, we are internet trolls.” continued Mongeau.

While many fans and press doubted the pair’s wedding throughout their engagement, the self-declaration of the wedding being solely for exploitation confirmed doubts.

The pair live-streamed their wedding for $49.99, with 66,000 people paying through the pay-for-view privilege on platform Halogen.

Viewers also had the chance to spend up to $75 to watch the event, which would have seen the platform take between $3.3m and $4.95m for a ceremony that lasted just 13 minutes.

The officiant at the wedding pronounced the pair in “holy cloutrimony”, further adding speculation into the validity of their wedding.

Their wedding reportedly cost $500k and took place at the Sugar Factory in Las Vegas.

Mongeau addressed her past comments on Twitter, saying “I know that things have moved so fast, are unconventional, and confusing but I love Jake. [sic]”

“I truly do, in the weirdest f****** way. every second of this rollercoaster ride has been so fun & crazy.”

While some fans may believe the wedding, feelings, and explanation are genuine, for many, the admission of the fake wedding is enough to confirm doubts, especially with the pair profiteering greatly as a result of their socially engineered situation.

with owing people some explanation especially with so many things coming out like the show (which is quite behind)... but i know that’s kinda the life we signed up for. idk. i’ll fuck off.

YouTube's biggest problem is that it can't censor stupidity

Jake Paul wants you to know that he's not a sociopath