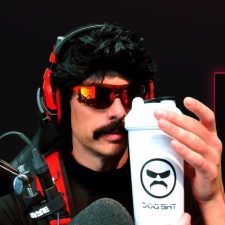 The shaker comes in white and features the PUBG player's logo in a bold black. Emblazoned underneath is what looks like the words 'dog sht'.

Despite clearly displaying the words 'dog sht', Beahm vigorously denies the claims made by fans in his chat, explaining that it actually says something else.

"No, it doesn't say dog shit," Beahm explained in his live stream as he revealed the shaker to his audience.

"It says The Doc. Says it right there, not dog shit."

He's right in that the cup doesn't actually say dog shit. It's a clever font that does actually read as 'The Doc', but then also reads as 'Dog Sht' when the shaker is mirrored on camera. That's quite funny, I guess.

The Doc also has his own range of G Fuel products including an existing black and red shaker, and his own flavour of G Fuel energy drink, which to our surprise, isn't dog shit flavour.