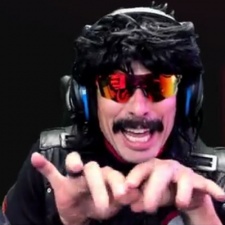 An emote that had been used by Twitch viewers to goad popular streamer Guy ‘Dr Disrespect’ Beahm, among other streamers, has suddenly disappeared from the platform.

The origins of the CD emote, as explained by Kotaku, are a little convoluted. It began when an existing meme referred to as ‘omegalul’ was altered to ‘D Omegalul C’ (which spells ‘Doc’) in an effort to target Beahm. This came about around the time the streamer took a hiatus from Twitch following his admission that he had cheated on his wife.

Somehow this overtime morphed instead into ‘Omegalul CD’ and then, in turn, CD. From this spawned a number of new memes including one where Beahm’s sunglasses were replaced with CDs and lots of general emotes where streamer faces were accompanied simply by the letters ‘CD’.

What does any of it even meme?

While this has been going on for some time, Beahm has only recently begun to show the first signs of annoyance. He last month grilled PUBG supremo Shroud about it on a livestream, during which he lambasted “these little chubby-cheeked wannabes like to laugh and giggle behind the scenes”.

The most apparent demonstration of his frustration, however, came on his own stream, where he directly targeted fellow streamer Forsen, whose fans are among the most abrasive on Twitch.

The result appears to be a complete removal of CD emotes from streamer’s channels. The presumption is that Twitch itself removed them, although this has not been clarified. The community would seem to believe that the service is looking out Beahm, who remains one of its biggest names.

Any suggestion of favouritism will be received unkindly, one would guess, particularly when Beahm himself is not shy of throwing shade at fellow streamers.