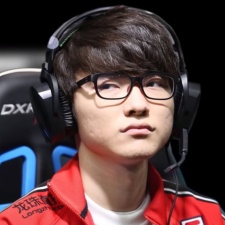 Second place this week goes to Twitch channel ESL_CSGO, providing coverage of the recent IEM CS:GO tournament in Chicago. That channel saw a meteoric 3249 per cent rise in views during the event.

Twitch streamer Shroud takes third despite a 16 per cent drop in views. Fortnite streamer Tfue shoots up to fourth with a 131 per cent rise in views.

The official Rocket League Twitch channel is having a successful week in fifth place with an 829 per cent increase in views. The channel is providing coverage of the Rocket League Season 6 championship.

Dota2mc_ru and PGL_Dota2 are both new entries to the chart also.  Both are Dota focused Twitch channels providing coverage of the Kuala Lumpur Major.

YouTube channel Nick Eh 30 is bringing up the rear despite a 17 per cent decrease in views this week.

Other entries this week include YouTuber Danoninho, a relatively small Brazilian streamer, and Symfuhny, a Fortnite Twitch streamer that has a YouTube channel on the side.

Professional gamer Faker (main image) has also made an appearance this week. The League of Legends icon's Twitch channel is closing the trending by followers chart.