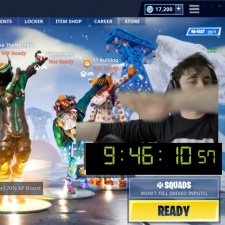 It turns out that dabbing for a very long time might help you make some money, or at least this was the case for YouTuber and Fortnite player Luke TheNotable.

On a recent live stream, Luke streamed the entirety of the infinite dab animation, which according to Epic Games can last about 10 hours. Over the course of his entire stream, Luke was able to make a total of $2000 in donations while also gaining more than 6000 new subscribers.

The live stream saw Luke's in-game Fortnite avatar perform nearly 72,000 dabs. Those who were watching had the option to his lobby and dabbed alongside him on stream, but the majority of it just featured Luke’s character dabbing and him providing commentary for the stream chat.

Luke also didn't physically dab for 10 hours, but he did join in occasionally to boost morale.

“Please don’t do this,” Luke TheNotable states in another video.

“If you do this correctly, at the end, literally nothing happens. I just really don’t wanna hear about any of you guys messing yourself up trying to do what I did. You could get hurt. I broke my headphones.”

Despite the huge increase in donations from the stream, Luke went on to donate most of the money generated to other Twitch streamers, including French streamer Mikoush16.