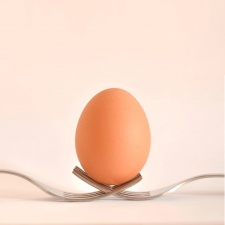 Jenner is one of the most popular celebrities on the planet with over 123 million Instagram followers, making her the sixth most-followed account in the world.

She previously held the title of having the most popular Instagram post of all time; a photo featuring her daughter Stormi Webster accumulated over 18 million likes.

However, the “Queen of Instagram” no longer holds that record. That now belongs to a newly made page featuring a picture of an egg.

Late last night, the Instagram account called EGG GANG posted a picture of the speckled treat with the caption “Let’s set a world record together”. The account has been verified by Instagram and has over 5.6 million followers to date. It's also now re-named itself 'World Record Egg'.

Since its original posting, the picture garnered a staggering 18.1 million likes from Instagram users, completely smashing Kylie’s original record. Some of the comments on the post after the record was broken included “Mission Accomplished”. Others went on to share their disbelief that such a random posting would actually get as popular as it did.

To the delight of many users on the platform, the Kardashian clan no longer is at the top of the Instagram food chain. That now literally belongs to an egg.

Kylie Jenner is now the most valuable Instagram influencer