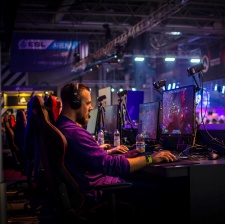 Content creators in the EU have expressed their concerns regarding Article 13.

Article 13, also known as 'The European Union Directive on Copyright in the Digital Single Market', is an agreement that requires social platforms such as YouTube and Facebook to take responsibility for copyrighted material.

According to a study by Comparitech, a large proportion of UK-based streamers are worried about the implications of the directive, which was passed by the European Parliament back in March.

Comparitech surveyed 1500 streamers in the UK, to ask whether the new ruling would turn them away from making content. It also asked whether creators would change platforms or just quit streaming altogether.

It found that 45.6 per cent of respondents would be actively dissuaded from streaming gameplay if it brought the potential of hitting copyright issues.

The lowest demographic was the 25 - 34 bracket, where 42.1 per cent of streamers said they would be put off by Article 13. The largest 'yes' came from the 55+ bracket.

Streamers are not particularly attached to their platforms, either. 44.8 per cent said they would switch to a different platform if the one they stream with stopped accommodating viewers from Europe.

But only 36.6 per cent of the surveyed gamers said they would continue streaming as a profession if views from Europe were unattainable.

Digital platforms have been speaking out against Article 13 ever since it was proposed last year. Multiple executives at video giant YouTube have expressed their concerns about what the directive will mean for many of the platform's creators.

YouTube chief business officer Robert Kyncl spoke out in September, stating that "the Copyright Directive won’t just affect creators and artists on YouTube. It will also apply to many forms of user-generated content across the Internet."

This point of view was re-affirmed by YouTube CEO Susan Wojcicki, who simply said that the Directive "poses a threat to both your livelihood and your ability to share your voice with the world".

Twitch CEO Emmett Shear also addressed Article 13 in a blog post, acknowledging that "Article 13 changes the dynamic of how services like Twitch have to operate, to the detriment of creators".