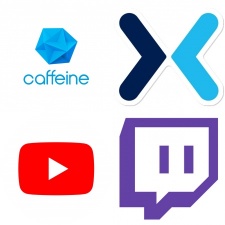 For gamers wanting to dip their toes into the streaming waters, there is an almost bewildering array of choices.

There are so many platforms vying for content that knowing where to start can almost be as big a challenge as becoming that ace content guru you were always destined to be. Here’s a look at the world of streaming and a few pointers as to how you might get started.

So, what’s the difference between streaming and video?

Streaming is effectively a live broadcast. Whereas a lot of the content you see on YouTube is pre-recorded, edited together and uploaded, streaming allows your viewers to see what you’re doing as and when you do it. Well, with a little bit of a delay.

Yes, it’s definitely technically easier and less time consuming than producing edited video, but it also has fewer gimmicks to draw on, and you can’t do retakes or edit out mistakes, so be careful what you say!

Is video better then?

It’s not better, it’s just different. Although if you’re prone to uncontrollable, questionable outbursts, video probably might be better. That aspect aside, streaming is very popular for video games, where players can share their gameplay in real-time with an audience.

So people can watch me as I game?

Sure. Major consoles like the PlayStation 4 and Xbox One have services like Twitch built into them, so it’s easy to link them to your account and start streaming at the touch of a button.

But what about those streams I see where there’s an overlay of the person playing and chat windows and stuff?

A lot of that is done on PC, where it’s pretty simple to use programs like OBS Studio or GeForce Experience to set up a custom stream template. If you use a graphics card made by Nvidia, for example, all this stuff is built in. It can be done with consoles too, but it’s a bit more technical.

And I can make money from this?

Absolutely! The biggest streamers have sponsors who pay to either have their logo displayed, to run pre-roll ads or sometimes to have their products on screen.

You see those fancy chairs streamers are always sitting on that look like they’ve been thieved from a Porsche 911 parked out the back of the Tesco Extra in Worthing? They’re nearly always supplied by the manufacturers who want them to be seen on screen.

Video game streamers also have the option of earning subscriber income directly from Twitch, or earning tips from third-party services like StreamLabs.

So viewers tip streamers even though they can watch them for free?

I know, right? The gaming audience seems super keen to hand over cash voluntarily. The key really is to make your audience feel like they’re with you in the room, hanging out while you game. They want to be buddies and they want to interact – and will pay for your attention.

Often viewers are incentivised to pay up by having their name pop up on stream, or getting the chance to have a message read out. It’s a bit like in the olden days where your family would gather round the TV because uncle Geoff had been in the audience for Bullseye and you wanted to see whether you could catch a glimpse of his shiny, balding head and blotchy whisky cheeks in the background while Sue and Steve from Wycombe won a speedboat.

So Twitch is the best service for games streamers, then?

Arguably, but there are lots of options. Twitch is huge. Amazon acquired it for $970 million in 2014. In 2017 viewers watched 355 billion hours of video on the service. It also has over 27k partnered streamers and 150k affiliated streamers, the majority of whom are earning money from streaming.

The fact that it’s easy to set up no matter what system you’re using makes it an automatic choice for a lot of people. It also has the exclusive broadcast rights to a lot of big names like Blizzard’s Overwatch League, meaning it really is the go-to for much of the gaming audience.

Anyone else I should consider?

YouTube is trying very hard to get into streaming and grew its active streamer base by 343 per cent in 2017. It still only boasts between a quarter and a third of the audience commanded by Twitch, but when YouTube puts its mind to something, you have to pay attention.

It also does a better job of preserving older streams (although Twitch is improving), but YouTube is hardly flavour of the month with a lot of creators right now. The platform still keeps its YouTube Gaming and main accounts separate, meaning it’s not as easy as you might think for streamers to tap into those huge audiences.

Probably because Microsoft is busy promoting its own service called Mixer, which it launched in 2016 as Beam before later being revamped with a new name. Mixer is coming on well, but its audience is currently only a quarter of the size of YouTube Gaming and pales in comparison to Twitch.

With fewer streamers, however, it’s potentially easier for new talent to be discovered there and Microsoft is trying to position it as having the most welcoming audience in the streaming world.

It’s funny you should mention that! Facebook is trying to encourage video games streamers to join its Gaming Creator Pilot Program.

It has even set up an in-built tips platform to try and make it more attractive. It’s also signed some exclusivity deals of its own, meaning Facebook Live is now the only place to watch ESL One’s Dota 2 and Counter-Strike competitions.

Lots of things sound great, don’t they? Like the time that dude cemented his head in a microwave. Actually no, hang on, that never sounded like a good idea. Seriously, wtf?

Sadly, Facebook’s offering currently lacks a lot of the earning potential you see on Twitch and YouTube, and getting the existing audience to shift to a new platform is going to be a monumental task.

It’s a tough market to break into, then?

You could say that, although that isn’t stopping people from trying. Just last month a pair of former Apple execs announced a new service called Caffeine that aims to “re-imagine every aspect of live broadcasting”.

Among its hooks are apparent lag-free interactions and an in-built set of tools that will simplify the process for creators. It sounds great, to be fair, but whether that will be enough to force a gap for themselves in the market remains to be seem.

So what’s to stop me quitting my day job right now and making my fortune by letting people watch me play games?

The thing to remember is that for every streamer who is making a fortune there are many, many more who are making next to nothing. Getting paid to play games may sound like a golden ticket, but making it work professionally is actually incredibly hard and pretty much requires you to dedicate your life to it.

Most streamers face a year of more of streaming anything up to six to 18 hours a day before they start seeing a return, and even then you’re going need to be either A) an expert gamer and/or B) have a genuinely appealing personality.

Without those, the relentless slog of those gameplay hours and the time spent engaging with your audience isn’t going to amount to much.

I shouldn’t quit my job then?

Well, are you amazing at games?

Erm, no, not really. I couldn’t get past the Asylum Demon in Dark Souls.

That’s okay, a lot of people bounce off that game.

Actually, I didn’t even get that far. I kept dying to that huge ball of rock over and over again.

Oh. Do you have an electric and irresistible personality?

I just bought a second copy of The Complete Series of Friends on DVD so I don’t have to keep switching discs between the front room and the bedroom!

No, you shouldn’t quit your job.