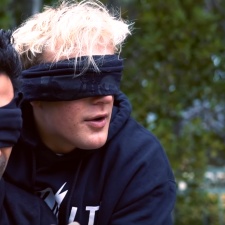 The Bird Box challenge, inspired by Netflix's latest horror flick Bird Box, is becoming a growing trend amongst creators on platforms like YouTube.

The challenge usually involves people trying to walk around or attempting a task while blindfolded.

However, in hopes of upping the shock value to viewers, some creators have tried to come up with new ways to put their own spin on the challenge. Unfortunately, this has led to another controversial point for YouTube celebrity Jake Paul.

In another act of stupidity, Paul decided to film himself annoying people in a library and walking into traffic with a blindfold on. There is a short disclaimer within the description of Jake Paul’s video (possibly to protect from any legal repercussions) but disclaiming that he's going to be an idiot makes it any better.

Outside the lack of any statement within the video to not to replicate the challenge at home, the skit violates YouTube’s community guidelines.

YouTube’s policy within their terms of service says it may age-restrict videos containing adults participating in activities with a high risk of injury or death. This is meant to include anything involving pranks, crazy challenges, or anything similar to what Jake Paul does in his video.

While it’s not yet known if either YouTube or Jake Paul will take the video down, it is very possible that some damage may already have been done.

This isn't even the first foolish thing that Paul has done this week. The creator is also under fire for promoting a gambling site in another recent video.

YouTube's biggest problem is that it can't censor stupidity

Jake Paul wants you to know that he's not a sociopath