Doornebuzz: "It’s difficult to stay afloat in a massive sea of people that are trying to do the very same thing" 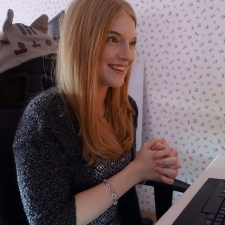 Denise, known online as Doornebuzz, began her streaming journey in 2015. She's managed to amass a small yet enthusiastic community of 12,000 followers on Twitch.

Doornebuzz streams a plethora of content, ranging from The Sims and Life is Strange, through to VRChat. She rests a large amount of her focus on engaging with her community and creating a 'home away from home' for herself and the people that follow her.

Influencerupdate.biz had a chat with Doornebuzz about her Twitch channel, managing full-time streaming and asked what advice she has for those looking to take streaming more seriously.

InfluencerUpdate.biz: First off, talk us through your Twitch channel. Elevator pitch! What do you do, how long have you been doing it?
Three years ago, I started streaming video games, talking out of my rear end, and just generally being a dweeb on Twitch as ‘Doornebuzz’ – someone who aspired to create a community of her own after having dabbled in other people's communities.

I had always sought out places where I could discuss my favourite video games, like forums. Twitch quickly became my go-to website, my no.1 source of entertainment - my little home away from home!

In turn, I wanted to offer people who were willing to hang out and chat with me that very same feeling.I stream various types of video games; stretching from 5-hour long character creation streams in The Sims 4, to jolly co-op with community members in Dark Souls III.

Viewer interaction is of the utmost importance to me. I love getting to know my viewers, and picking their brains on what makes them tick! I usually bother them by asking about their weekend, junk food preference, and dinner plans.

I have a (quality-wise) greater community than I ever could’ve wished for! I'm very thankful that these people choose to spend their time with me.

How do you structure your work days? Do you find working from home a blessing or a curse?
To tell you the truth: I don’t! At least, not as well as I’d like to. I try. I struggle with being my own boss, in that sense. I am often late to stream, and sometimes my productivity when it comes to streaming-related work outside of being live really takes a dip.

I find it both a blessing and a curse. Being able to manage your own time is wonderful, but there’s no one to slap you on the fingers if you mess up. Though co-workers can sometimes be a pain, streaming gets really lonely.

Who is your target audience, and how do you think that affects your work? Does it make you fearful to express yourself in other ways and styles?
My target audience is either around my age (25), a little younger, or a little older. I like to think I’m very unapologetically me, but are you ever truly yourself on the internet? The fact that streaming is live does make it harder to put up a front, so it’s very raw in that sense.

Sometimes that makes it difficult when you're having a particularly bad day. I talk about adult subjects because they keep me busy, and I know my viewers can relate to them. I do like to steer away from certain topics, like religion and politics, because they often cause conflict between people with varying opinions.

I’m not about to regulate a heated discussion between 50 people. We’re all on Twitch for our entertainment, not to strengthen the headache our daily life may have given us.

I’ve marked my channel as ‘Mature Content’, which means you get a little pop-up warning the first time you visit. Chances are there’s some impressionable viewers that watch from time to time, but I don’t find myself worrying about that.

I think everything anyone says should be taken with a grain of salt, and I’ve emphasized this many times. I’m human, and so are the content creators I look up to. I try to remember both myself and my viewers that you probably shouldn’t idolize these people too much.

They’re just as prone to making mistakes as you are. That being said, of course I care about the choices my viewers make in their lives. I want them to be happy, so I try not to do anything that might make them feel otherwise.

Do you think the negativity surrounding YouTube will eventually lead creators to hop over to Twitch, or is YouTube is too big to fail?
I’d like for creators to relay the message to YouTube in that manner, but I imagine it might be scary, risky even, and very hard to get your community to follow you to another medium.

I don’t think YouTube will die out, but with some of their recent decisions, I find myself almost rooting for it. I, personally, have stopped uploading any type of content to YouTube, but that’s mostly because I’ve built my entire following on Twitch.

What do you think it means to BE an influencer? Do you think you have a certain responsibility to inspire and stand up for the right things, even if you don’t want to?
I think about this quite often. For example: sometimes I’ll choose to shy away from tweeting about something I wouldn’t even think twice about shying away from if it wasn’t for my “status as a streamer”.

For me personally, it’s very important to put positivity out into the world. Let’s say I see a tweet about an artist having been treated wrongly by someone on my feed. Instead of responding negatively to that, I’ll take the time to tweet out some of my favourite artists who are more deserving of my attention than someone who doesn't know how to properly treat people.

Take the negative, and turn it into a positive. Sometimes I do feel it’s important for people with a large following to shine a light on certain subjects, but it’s very case-by-case. I don’t think people should be looking to me for an opinion. They should form their own, and stand up for the things they think are important.

How do you think the Twitch/Influencer is scene is performing currently? How do you think you’d fare if you started a new channel right now?
I think starting out is getting harder and harder to do. It’s difficult to keep your head afloat in the massive sea of people that are trying to do the very same thing. It’s not impossible, but it will take time.

An amount of time most people didn't expect to be a part of it, or aren't prepared to put in. It takes a lot of patience to grow your channel. I think great success comes with either time, luck, or having some type of unique thing that really separates you from the rest.

All of these are very hard to achieve. I'm unsure if there's a huge difference between the time I started, and now.

What are your personal highlights of your career as a streamer so far?
I think some of my highlights are mostly things we've done for other people. My community raised a lot of money for a family member of mine with MS, and a community member who lost their house in a flood.

This is when the power of Twitch truly shines, and it becomes visible for people on the outside. Moments where I just sit, chat and laugh with my viewers for hours stay with me, because that's what I enjoy the most. That type of connection.

Through streaming, I also became a freelance host for a company called 'ZoominGames'. Last year during Gamescom, I got to meet and interview some of the biggest names amongst people working on The Sims. That was a pretty dreamy moment for me!

What advice would you give to people looking to start streaming?
Know that it will get just as hard as any other job at times. Video games are fun, but making them your job is not the same thing as playing them.

Make sure to keep a part- or full-time job on the side, so you don’t have to worry about the financial aspect of things. Be patient. All good things will come to you in time, but they won’t happen overnight.

Do not compare yourself to other streamers. Chances are, they’ve been at it way longer than you have.

Don't take too much time to yourself, be consistent, but also be wary of taking too little. It's all about balance, and recharging your battery. Take everything I've said just now with a grain of salt, and most importantly: have fun!