A year of IGTV - what's new and what's next for Instagram's video platform? 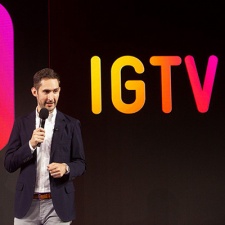 Kevin Systrom is the founder of Instagram, with his finger in more pies than an eager Greggs employee.

Just over a year ago, Systrom brought Insta-buffs together for an exciting announcement: an Instagram plug-in designed for content that would “change the social video landscape” forever.

Already owned by Facebook, the billion-user platform’s Stories feature has trumped Snapchat - the company originally behind content that disappears within 24 hours. Going for gold, it was time to be a little bit more like Google’s YouTube too. There was only one thing for it: enter long-form video content and bonjour, IGTV.

At first, IGTV’s takeoff was sluggish. Firstly, you must have 10,000 followers or more to share videos up to an hour-long, while regular users can go up to 10 minutes. Content creators used to short organic videos were suddenly required to invest more time, effort and money into more professional videos.

Secondly, there’s currently no money incentive for influencers. On YouTube, vloggers can justify time spent creating videos because ads pay for them. With no promise of financial return, IGTV is yet to rival YouTube.

Instead, many YouTubers are using IGTV as a testbed for video content. Many use the channel to share videos that might not fit with their YouTube identity - more casual, intimate videos that allow creators to wade into styles not necessarily designed to be worthy of advertisers’ money.

The low-pressure atmosphere of IGTV has led to more authentic and organic content. No lights-camera-action set-up, just an iPhone and often - a little more spontaneity.

How is IGTV evolving to compete with bigger platforms?

The bigwigs at Instagram know the platform must vanquish its reputation of ‘the recycling bin for YouTube’, as one 14-year-old who attended digital video convention VidCon described it to Digiday. In efforts to do so, IGTV has two major updates since the launch:

What’s next for IGTV?

With no promise of financial return, IGTV is yet to rival YouTube.

You guessed it - money, money, money. Kevin Systrom has said he wants to make IGTV sustainable for content creators, in time. There are no ads for now, but when commercial opportunities are brought in, their success will be dependent on users’ response to them (something no one holds back on).

Jim Squires, vice president of business and media for Instagram, said that monetization would come “soon” at a VidCon fireside chat  last month. There was no information of when this would be or what it would look like.

At the same chat, IGTV creator Vincent Marcus used the analogy of four tyres on a car to describe Instagram content. Stories are diary entries, the feed is a highlights reel, live video is for meeting and interacting with fans, and IGTV is the main programme.

What can IGTV learn from failed online video platforms?