Naysayerz: "eSports is a very fragile, organic space, and it requires nurturing" 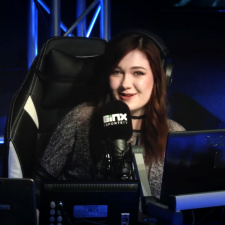 Heather Dower, known in the eSports world as Naysayerz, is a presenter and content creator, who very swiftly made her way from the underground eSports scene, onto GinxTV- Sky’s dedicated competitive gaming channel.

While full-time presenting keeps her busy, Nay is also a content creator in her own right and streams over on her own Twitch channel. She’s also a frequent guest at gaming events around the UK, and can often be found hosting some sort of gaming stage.

Dower is one to watch; her infectious personality and skill will see her on the frontline of a lot of cool things in the eSports space. You may have spotted her on our Top 20 Creators to Watch 2017 list we dropped earlier this year. She's also brimming with advice and insight for those looking to invest in the eSports space, and how to best integrate a brands in such a new and delicate industry.

InfluencerUpdate.biz: First off, talk us through what Naysayerz is about, what do you do?

Naysayerz: I’m an eSports personality that’s gone on a bit of a journey. If you’d have told me 10 years ago that this would become a business - I probably wouldn’t have picked the name ‘Naysayerz’.

I started off broadcasting games, and now I host a daily eSports talk show on Ginx TV - Sky’s dedicated eSports channel, I’m also a stage host at various gaming events, and an adviser for the British eSports Association. This means I have a bigger role influencing how we change the horizons of British and European eSports.

What excites you most about the eSports space?
Thinking about this is really tough; if you were to ask me 4 or 5 years ago when Fnatic were winning their first majors in CS:GO, I probably would have a really naivé approach to eSports being a growing space rather than just a fad. I'd have been excited about NA teams getting involved with CS:GO, because that was completely unheard of back then.

Now the things that excite me are things that I'm informed with and the things I have first-hand experience with. Overall the biggest movement that excites me right now is the shift from it being called an 'eSports space', to being acknowledged as an eSports industry. At the moment it's still a space and that gives it an amount of uncertainty, and for eSports to be accepted as a field that has stability and growth - it needs to be recognised as an industry. I love being a part of this early transition.

I'm also really excited about the amount of inspiration that eSports is bringing to young people all around the world, and the unification of countries coming together and working alongside each other, regardless of their pronouns. The acceptance and development of eSports is leading boards like the International Olympics Committee to work with gaming in a way we've never seen before.

What are the biggest trends in eSports right now, and what should we be following?
Trends come and go, as with everything, but I think it's awesome that eSports even has trends. It shows you that there's a wide interest and that things are constantly evolving. We've obviously got PUBG as the massive trend right now, smashing sales and breaking the records for the most concurrent players on Steam.

We've got Call of Duty WWII that's just launched and has had a great response within the eSports community, we've also got up and coming games like Batallion 1944. One of the trends we're seeing right now is games heading back to the play-style of old Call of Duty and FPS games. One of the major shifts we saw this year was a lot of professional players for games like Team Fortress 2 and Halo, going over to Overwatch instead, because that was becoming the big title to watch.

Alongside that, we're also picking up on mobile eSports. Games like Vainglory, Arena of Valor and of course Hearthstone are becoming very big trends. With the launch of the Razer phone and the iPhone X, we are carrying very powerful machines in our pockets.

There's an ageing demographic in eSports we also can't ignore - the main demographic for consuming eSports is actually 25 - 35. So we're obviously commuting to work, we're on the go, so we're more inclined to play games on portable devices in general.

What do you think it means to BE an influencer? Do you think you have a certain responsibility to inspire and stand up for the right things, even if you don’t want to?
As we move more in to the modern way of consuming media - which is through personalities and influencers - creators have a lot more freedom. You may fall in to what you or your community think is your responsibility, and I think it's hard to gauge whether you are qualified to comment on something or not.

Your personal influence on people isn't something you think of when you first start up a YouTube or Twitch channnel. It's important to stick to your morals; people will come and go through your channels because they disagree with your opinions, and that's just life. That's just human interaction, whether you're an influencer or not.

I get people contacting me a lot asking for advice in situations that I'm not familiar with. Is my my duty as the face of a brand to respond to those? Perhaps not, but I will, because I see everyone as part of the same movement and community. It can be taxing on an influencer, but I think it's very special that we can generate these connections.

Is it difficult to gauge the worth of professional players in such a new and limitless business?
Yes. I don't think enough credit is ever given to professional players, or the support networks surrounding them. Players are working tirelessly to remain in tournament systems, whether that be in the top tier or lower tiers.

I also think the industry is often quite influenced by fans, rather than recognising great play. For example, the League of Legends Worlds 2017 tournament just finished. Samsung Galaxy came first and beat SK Telecom T1 which is absolutely unheard of, and people were still just talking about Faker, a player on SK.

Now I don't know the stories behind the amazing players on Samsung Galaxy that managed to defeat the world reigning League of Legends team, because no one was talking about. While Faker is still one of the best professional gamers in the world, he wasn't at that time - and no one was highlighting that.

We also don't have enough set data on these eSports players. There's nowhere that people can go and research a particular player's statistics of greatest plays. However, I think as the industry grows and more money is invested, resources will be made so people can track and collate this data, and with that, we'll be able to more accurately gauge professional gamers and the work they do.

Companies are realising that influencers come in different shapes and sizes; they're not just statistics anymore, they're people.

For gaming as a profession to be accepted, it's important for people entering the space to understand how business models and branding work. and be as educated as possible. Of course, players that were picking up Quake years ago never had to think about that, but they had other careers and skills to fall back on.

I'd say educate yourself formally, go to as many LANs and community events as you can, meet the community. Learn how games are made, and what it takes to make a game balanced. You need to understand how everything works before you can use it to your advantage.

What advice would you give you companies looking to invest in the ever-expanding eSports space?
I'd say that companies should speak to people in the space directly, and follow active, thriving groups rather than the ones that are just known by name.

I think businesses are often led to believe that it's all about views and figures, when it's not at all. eSports is a very organic, fragile space. If corporate bodies start annoying or pushing the people that are working and grafting - who are also ultimately responsible for raising the idea of branding and sponsorship to those around them - that can tarnish a company. However, I also don't want businesses to get cold feet when it comes to working with eSports personalities.

A lot of companies dabble in the space, don't get the desired results straight away and then retract, which I think is more damaging. As we said earlier, trends come and go in eSports and the campaign or product that a company is pushing might not reflect what people are following. It's important to roll with the waves and gain an understanding of the ecosystem, so you can gauge what your return on investment more accurately

What are you plans for the future?

Funnily enough I didn't envision myself having a career as a TV presenter. I've always been passionate about and wanted to work within politics and education. I want to get involved with that a lot more within eSports. I'm looking to progress in to management, and being a link to those brands that want to get involved in the eSports space. I'd like to keep streaming as a part time job or something I can just enjoy; my personal brand Naysayerz will always exist somewhere.

In terms of career progression though, I'd like to move into the business and development side of things a lot more.There's also a lot of government talk around eSports and I think it's exciting that its reached a point where policies and regulations are being written, and I'd like to be involved with shaping that.