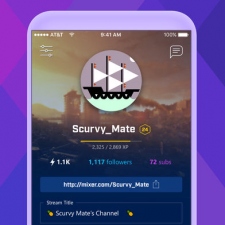 Can Microsoft make a dent in Twitch and YouTube’s domination of the games live-streaming market? The company’s new Mixer Create app has emerged from beta.

The app is available for Android and iOS devices, and will enable influencers to stream gameplay, post vlogs and chat to viewers from their device.

There are differences on the two platforms. The Android version of Mixer Create will work with any game, but on iOS it will only work with games that support Apple’s ReplayKit system.

Mixer Create also supports collaborative streams, with up to four gamers at once able to join together for ‘co-stream’ broadcasts, with invitations handled within the app.

The app actually started life as an independent startup called Beam, founded by 18-year-old American Matt Salsamendi. It won the Startup Battlefield contest at the TechCrunch Disrupt NY conference in May 2016, and was acquired by Microsoft that August.

“Beam has evolved game streaming from a passive, watch-and-chat experience into one with real-time participation by the viewer; directly into a streamer’s game play and live broadcast,” wrote Microsoft’s Chad Gibson in a blog post announcing the acquisition.

“Using Minecraft as one example, with Beam you don’t just watch your favourite streamer play, you play along with them. You can give them new challenges and make real-time choices that affect their gameplay, from tool selection to quests to movement; all through simple visual controls.”

In May 2017, Microsoft rebranded Beam as Mixer, and built it in to the Xbox One’s Guide and Windows 10’s Game Bar. This week’s launch represents its coming-out party for mobile gaming too, with Salsamendi still overseeing the service’s development.

Mixer Create should provide competition for Twitch, which has been working hard on its own mobile app. In June, Twitch added the ability to broadcast video (if not gameplay) from its relaunched app.

Startups including Mobcrush and Mirrativ are also playing in this field. The former raised $20m of funding in October 2016, at a time when it claimed more than one million monthly active users.

Microsoft's Mixer Create is a free download for Android and for iOS.