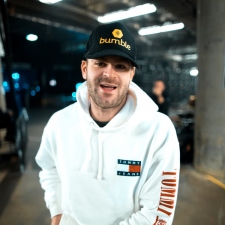 Dating app Bumble has turned to a pair of chart-topping influencers for its latest marketing campaign: musical group The Chainsmokers.

The app, which competes with Tinder, invited students at Southern Methodist University in Dallas to swipe right to enter a competition to win tickets to the group's concert this week.

Those that won were asked to meet at a certain spot on the campus on Tuesday afternoon, only to find that the Chainsmokers had turned up for a surprise meet'n'greet. One of them also got to introduce the band at the concert itself.

Bumble says that more than 1,000 students entered the contest, but that this is just the start of its ambitions to run marketing campaigns with musicians.

The Chainsmokers partnership marked the debut of an initiative called Bumble Beats, which will aim to get more US college students using Bumble rather than rivals like Tinder, using live music as its focus.

"This is just the first of many artist surprises that we are planning to hold at college campuses across the country," explained Bumble in a blog post.

"Bumble Beats will keep expanding to universities across the country, giving as many students as possible the chance to win the ultimate surprise of tickets to their favorite concerts, delivered by the artists themselves."