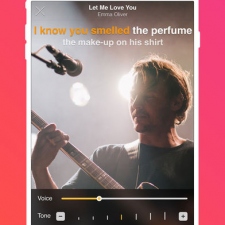 With lip-synching app Musical.ly having recently been bought for upwards of $800m, will there be another social music-app craze to follow in its footsteps? If so, Spotlite may be one of the candidates.

The app enables emerging musicians to broadcast live video of their performances to fans who've followed them. Like other livestreaming apps, viewers can also reward their favourite streamers – in this case by buying virtual coins and giving them to musicians, who can then cash them out.

Spotlite has just raised a $10m funding round to continue developing and promoting the app, with Silicon Valley venture-capital firms Sequoia Capital China and BlueRun Ventures chipping in.

According to TechCrunch, Spotlite already has 250,000 active users two months after launching, but has ambitious plans for global expansion in the coming year.

“Currently our focus is increasing users and perfecting the product,” said its VP of marketing and content Gina Juliano. "We expect to generate income via different model,s including virtual gifting, memberships and advertising sponsorships."