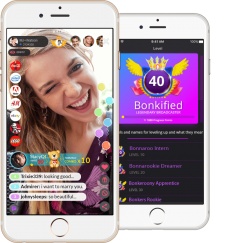 To British ears, an app called BonkLive may sound like a live-video service with… adult material. Thankfully, that’s not the case.

Instead, BonkLive is the latest live-streaming app hoping to create a new wave of social influencers.

Its parent company, Philippines-based startup Boink Live Streaming, is working with influencer-marketing agency The Sociable Society to sign up existing social-media stars from other platforms.

Part of its pitch is that they’ll get a share of advertising revenues on the platform. Brands can pay as little as $60 to have their logo promoted within live streams, before paying $0.25 every time it’s ‘clicked’ on.

Brands will also be able to run 30 or 60 second commercials on BonkLive, or have streamers read them out to their viewers.

“The Influencer Program will engage some of the biggest social media stars in the United States as early adopters of BonkLive,” added The Sociable Society co-founder Jay Kent-Hume.

The startup is setting its sights on growing to 30 million users, although it’s very early days, with strong competition from established apps like Live.me, YouNow and Live.ly, not to mention the live-video features of Facebook, Instagram and Twitter.