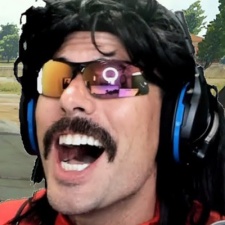 It’s not only Logan Paul that has found himself in a spot of bother following a return from sabbatical.

Guy ‘Dr Disrespect’ Beahm returned to Twitch earlier this week after a prolonged break following his admission of adultery. Now he has been accused of racial stereotyping owing to a persona he sometimes adopts when he encounters Chinese players in the game, whom he speaks to in a faux-Asian gibberish language.

“He clearly thought he crossed the line with cheating on his wife, but racism? Guess he finds that ok,” Wong said. “Just like the dolt Logan Paul, the reason this racist behaviour is unacceptable & dangerous is simple: Young and extremely impressionable kids adore these influencers. They learn their mannerisms. They copy them. And they perpetuate them between friends, at school, and at others.”

Disrespect responded to the allegations on a Twitch stream yesterday, citing his many Asian and Mexican friends and the fact that his wife is mixed race and of Filipino descent. He went on to accuse Wong of being an “idiot searching for attention”.

Disrespect’s focus on Chinese players is connected to the perception that a disproportionate number of players from the country are responsible for the bulk of the cheating that goes on in games such as PlayerUnknown’s Battlegrounds. Many fans have for some time called for region locks that prevent players from one territory competing on the servers from another.

How willing Twitch will be to act is up for debate. Certainly the site’s T&Cs suggest that a permanent ban on his account is quite possibly justifiable. However, the popularity of his return and prominence to the channel may lead it to a different conclusion.