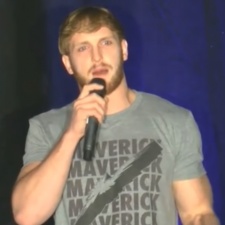 YouTube anti-hero Logan Paul is no stranger to odd stunts, as we are all too aware. However, it's hard to tell whether the influencer's latest play is a joke.

Paul made a special appearance at the Flat Earth International Conference this weekend. According to the event's site, it's an "educational endeavor composed of individuals and organizations uniting around the common purpose of the true scientific inquiry of the created earth."

Paul was given a spot on stage to introduce himself to the community and discuss his flat earth theories.

“I consider myself a man of truth, someone who hates being ignorant,” said Paul, on stage at the conference.

“I try my best to avoid being ignorant. That’s why I decided to come here. If I’m going to put my name out there, I want to know the facts,”

"Some of the best scientists can't even explain gravity."

The convention's organiser Robbie Davidson spoke about how Paul's involvement with the movement could popularise it further. He seems convinced that Paul's new found enlightenment is authentic.

“This is the first step: someone with a very big following putting their name on the line and saying ‘you know what, I’m almost there. There’s a lot of compelling evidence,’” Davidson says.

“I have a very good feeling he’s genuine."

However, Paul's recent interview with The Daily Beast has led to some questions about Paul's sincerity. A video interview from the event shows Paul clumsily stumbling through his flat earth theory, before moving off camera to giggle repeatedly.

Other creators are now speculating whether Paul is genuinely convinced that the planet is a flat plain, or whether he's just doing something obnoxious to make more headlines. We have a feeling it may be the latter, but its worked for him either way.