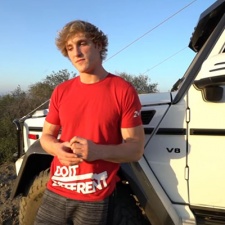 Controversial YouTube star Logan Paul has said that an urge to explore his creativity is the reason behind his decision to quit his daily YouTube uploads.

"I have done a lot of vlogs every day in a row," he said in the video below. "I'm blessed, I'm thankful, but your boy wants to exercise his creativity in other ways.

"YouTube is not my career. This is a hobby. I hopped on this platform two years ago. I have diversified. I've got my tentacles spread out in a lot of industries."

We don’t yet know precisely how Paul will be focusing his creative juices, but he did allude to a greater emphasis on music, working on a new talk show and training for his much publicised boxing match with Ksi.

He did however vow to keep uploading videos, albeit at a slower pace, adding: "I am proud to say the vlog will never be finished as long as my heart stays thumping on this goddamn earth."

It could be that creative desire really is the driving force behind the decision, although it does come at a time where Paul is suffering from a big decline in viewers and subscribers on YouTube.

Business Insider reports that since August of last year his views have dropped by around 47 per cent. Since June his subscriber acquisition rate has dropped by 88 per cent. This period includes both Paul’s time away from the platform after the suicide forest controversy and the temporary suspension of ads on his channel.

Of course, he still has 17m+ subscribers and is believed to be earning over $5m a month, so it’s not all doom and gloom.

Paul recently launched a Twitch channel, although it’s fair to say the reception received from the community thus far has been mixed.