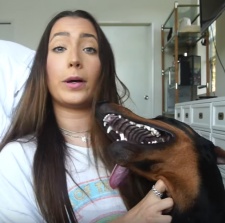 A YouTuber has denied engaging in animal cruelty following a video online.

Brooke Houts is seen in footage uploaded onto her channel where she appears to hit and spit on her Doberman dog named Sphinx.

In the video, Houts is seen scolding her pet, before smacking at spitting on it.

In a statement on Twitter, she responded dismissing the claims that she abused her pet. It read, “anything I say isn’t going to make those who believe I’m a bad person stop believing that, and I’m aware of this.

The Los Angeles Police Department has launched an investigation into the unedited video that was uploaded as a result of mass complaints.

“I am not going to play the ‘victim card’ or anything of that sort, but I do want to point out that I am rarely as upset as what was shown in the footage,”

Though Houts clarifies, “this does not justify me yelling at my dog in the way that I did, and I’m fully aware of that.”

Following the uploaded video, Houts’ has taken the video offline, as well as deactivating her Instagram account.

The news of influencers mistreating their pets, follows Mark Meechan, known online as Count Dankula, was fined £800 in April 2018 after training his pet pug to salute to Nazi phrases and terms.

Meechan has since had his tribulations documented in BBC Three documentary ‘The Nazi Pug: Joke or Hate’ which has been available to watch since 29 July 2019.

More recently, popular Twitch streamer Alinity Divine faced similar criticism online after throwing her cat over her shoulders in a live broadcast. In a separate stream, she was also spotted feeding vodka to her cat.

Ever wondered how much money YouTubers make? This handy app could give some insight