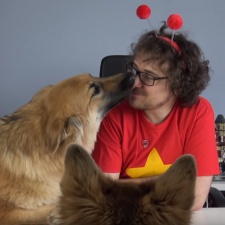 Hardcastle ran a 10-hour long stream on Twitch yesterday, playing various games with a handful of content creators throughout the broadcast.

The original donation target was £10,000. The target was raised to £15,000 after fans and viewers donated over that amount.

Hardcastle also ran a Comic Relief fundraising stream last year, drumming up over £17,000 for the charity.

The 11 hour stream is done! Thanks to everyone who guested, @Mattophobia for making it go and all of you for raising £15,626 for @comicrelief!

Last year, Hardcastle announced his first book 'Fuck Yeah Video Games'. The book was released with crowdfunding platform Unbound and reached 100 per cent of its goal in just 15 minutes after going live.

The project is now 1876 per cent funded, with the book scheduled for release in October 2019.