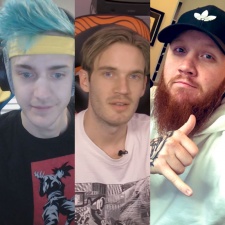 Forbes has dropped its list of the top 10 earners of 2019 inside the gaming space. The list is unsurprising of course, but it's also not a rich list topped off by PewDiePie, so it's quite refreshing too.

2019's list is topped by Tyler 'Ninja' Blevins, Fortnite star turned global merchandising icon. After a meteoric rise on Twitch throughout 2017, Blevins went from strength to strength with various opportunities, evolving from gaming influencer to celebrity. His switchover to Mixer in August 2019 sparked a chain reaction of other streamers moving around, with the top platforms offering out lucrative deals to snap up the industry's top talent.

The star kicked off 2019 with a New Year's Eve livestream from Times Square, where he delivered the most painful floss anyone has ever seen. That didn't set the tone for his year - Blevins was named in TIME Magainze's most influential people of 2019. He released a book on how to get good at video games. He became the first gamer to have his own custom skin inside Fortnite.

Blevins also recently partnered up with Addidas to release a shoe design, which sold out within a matter of hours. And while unconfirmed, reports have suggested that Blevins may have been paid around $30m just to switch to Mixer. In short, he's had a pretty good year.

Despite a turbulent year, Felix 'PewDiePie' Kjellberg clocked in second place. Kjellberg is still raking in big bucks despite the consistent controversy circling him. However, YouTube's top earner announce that he'd be taking a break from content creation in 2020, but the length of that break remains to be seen.

Interestingly, PewDiePie actually earned less in 2019 than he did the year prior, where he ranked ninth in Forbes' top-earning gamers list. But it's not just Kjellberg earning less, everyone on YouTube is earning less, and streamers are earning more.

Other creators gracing the list Mark 'Markiplier' Fischbach and Daniel 'DanTDM' Middleton, who both appeared in Forbes' 2017 and 2018's lists respectively. Newer additions to the list include Michael 'Shroud' Grzesiek and Timothy 'TimTheTatman' Betar, fresh talent racking up the dollars on Twitch and Mixer.

For the first time, Forbes' top-earning gamers list includes multiple streaming personalities. Historically, this list has always been dominated by YouTube's top earners. Not only has Tyler Blevins made history as the highest-paid streamer, but the gates are also now open for other streamers to make seven-figure sums via live broadcasting.

There's also a distinct lack of women on Forbes' 2019 list, as there was on the 2018 list. In fact, the last time a woman appeared was on the 2017 highest paid YouTubers list, where Lilly Singh took 10th place.