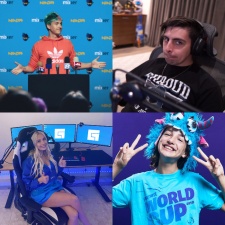 In August 2019, leading Fortnite streamer Tyler 'Ninja' Blevins announced that he was leaving Twitch after 8 years in order to broadcast exclusively on Mixer.

Blevins' entire Twitch audience, comprised of a record-breaking 14.6 million followers, were all encouraged to move over to Microsoft's streaming platform, which launched in 2016.

Blevins' surprising departure sparked a turbulent new trend within the streaming space - one that saw creators of all sizes exploring new directions and signing new contracts with different platforms. It also kicked off a rush among platforms to offer lucrative new deals in order to entice hot property from one platform to another.

In the last six months, a handful of popular streamers have either left a platform, signed with another one, or made a conscious effort to announce that they're staying exactly where they are. The current game of musical office chairs going on within the streaming space is difficult to keep up with, so we've compiled a list of 2019's biggest platform hoppers, where they started, and where they are now.