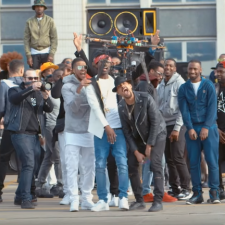 It’s as generation-defining as punk: a home-grown British phenomenon that was once completely underground. Until 2016, grime didn’t even have its own section on iTunes. But Blighty soon caught onto the little-known genre and it’s smashed into the UK music scene like a raw AF riddim.

Influenced by garage, jungle and hip-hop, grime emerged in London in the early 2000s and its growth has inevitably been aligned with lucrative deals and commercial success. Pu-pu-paper, as Skepta would put it.

Grime artists aren’t just reaching the masses onstage - brands are drooling over the marketing potential of influencers from the scene. From clothing to drinks, companies are using the attitudes, fashions and even political views of grime superstars to communicate authentically with young UK audiences. Here are some of the most interesting collaborations and what we can learn from them.

London-based Kano is a grime MC who still hangs out in his old home district, East Ham. His real dedication has given him serious status within the music genre - stepping out of the ‘gritty’ box and into one with lashings of luxury.

The artist collaborated with Mercedes Benz in an ultra-authentic, real bad-boy-megastar advert for the car brand’s three-part campaign #YouDrive. It was an industry and social media first: using Twitter in real-time to drive the action of the story.

Web users could vote on Twitter for the scenario they wanted to see on the next ad break. Kano is an unlikely influencer for Mercedes, which has less appeal to youth culture than other luxe carmakers such as Audi or BMW. So, the ad slots were perfectly placed during The X Factor to target young professionals.

It was ultra slick - tapping into a growing phenomenon of “second screening” (watching TV at the same time as looking at another device) and creating a buzz that appeals to a new generation of customers. Well played, Mercedes.

A “shared level of cool” is what brands need in order to win dream influencer partnerships with the likes of Stormzy. That’s according to Gareth Leeding, creative director of We Are Social Sport, the agency behind adidas’ 2016 collaboration with the big-time grime emcee.

Authenticity is key: brands cannot just channel the grime image and plonk a logo on it. It needs to be a credible match from the start.

Another campaign for adidas Football by We Are Social used the hype around Paul Pogba’s move to Manchester United (the most expensive football transfer in history at the time) and amplified it with an accidentally “leaked” music video by Stormzy and the footballer himself.

30m views, 3m shares and 400 news features later, the influencer mashup positioned the brand at the heart of the media frenzy with cultural relevance - and without all the usual cliches.

Grime rapper Chip is an unlikely influencer for fried chicken. But in a clever campaign for KFC’s #PackMoreIntoLunch challenge, the brand worked with the artist to shoot and edit a music video in under one hour. The smart collaboration was an influencer hotbed: grime legend Kana and Wretch 32 both starred alongside Chip (on their lunch hours) to harness exposure and hype around the campaign for the brand’s primary audience - young adults. A seamless package.

The anti-authoritarian philosophy of grime merges perfectly with Red Bull’s brand image. Which is why the marketing team behind the energy drink company are brilliant for coming up with Grime-A-Side.

On the Red Bull website and YouTube, you’ll see teams of grime MCs from eight British towns and cities to go head-to-head in grime-offs. From Bristol to Birmingham, the content is fresh, clever and completely relevant to the brand’s target audience: 18- to 34-year-old men who like being outdoors, taking risks and pushing boundaries.

And no doubt love a bit of grime. It’s not just superstars getting down and dirty - Red Bull also showcases newer talents with an open-mic-style ‘Riddim Rally’. Using both smaller artists and local talents in these campaigns is a powerful form of micro-influencer marketing.

Grime posterboy Skepta is firmly at the top of the brand marketing wishlists. Japanese sports brand Uniqlo appointed the artist as an ambassador for its campaign “This Way To Utopia”. The luxe leisure brand wanted to champion London life, self-expression and cultural diversity.

President of Uniqlo’s parent company Fast Retailing issued a statement stating that the campaign ambassadors showcased this in the best way possible. With the MC regularly clothed in tracksuits and puffer jackets, it’s a match made in heaven.