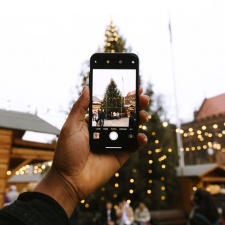 Coca-Cola can thrive without influencers at Christmas. You know ‘Holidays Are Coming’ when you see the big red truck stopping in your city.

For most of us mere mortals, though, we need to ramp up the marketing to land sales at the most important time of the year. Nostalgia and cheer will always appeal, but it might not be enough.

When the Christmas ad hype is loud and bright, you need to build a deeper level of trust to stand out. Wise brands lean on influencers - but if you’re gonna do it right, you need a strategy. These two influencer-led trends will help you shake up your festive output and be more creative and authentic this season.

‘Tis the season to be woke

This means consumers are focusing on the simpler things and vlogs like this sustainable, vegan festive gift guide by Jenny Mustard and this zero-waste Christmas gift guide by Sustainably Vegan are totting up hundreds of thousands of views.

We’re living in a time where consumers want to make positive differences with their purchases more than ever. Influencers with genuinely responsible ethics can appeal to shoppers with social purpose.

Most influencers only work with brands that fit with their values and image organically - an important factor when promoting a product organically. By working with an ethical social star, respected and trusted by their followers, you gain trust by association.

You don’t need big bucks to invest in influencer marketing. Micro-influencers champion quality over quantity where follower-counts are concerned. Many only ask for a modest fee or an exchange of products or services for sharing to their dedicated following.

If you have the budget for a more well-known face, even better. With a nation fatigued and divided by Brexit and the December election, comfort and familiarity will be more important than ever. Walkers has nailed it this year, bringing the Queen of Christmas, Mariah Carey, in as the face of its ‘Crisp-mas’ campaign.

Actual content over adverts - it goes for toys too

Kids are less considerate of consumerist ethics, obvs. It’s all about what Santa is bringing - and clever toy companies are also using influencers to land a spot on Christmas lists.

Rather than pushing toys in kids’ faces, marketers are being more experimental. We’re leaving the age of ads - even unboxing is fizzling out - while watch-along games and more real-life kids playing with real toys reign supreme. You can guarantee Ryan ToysReview’s 20 million subscribers will be asking for whatever the seven-year-old influencer is playing with this year.

Even Barbie’s an influencer now. Her YouTube channel showcases Barbie as a vlogger - with videos such as ‘Will Barbie Get Pranked?’ and this Christmas DIY tutorial with her ‘special guest’ mother.

Mirroring this real-life vlog content is more effective than traditional advertisements - her ‘Day in the Life’ vlog has had almost 900K views. Honestly, it’s amazingly watchable. I lost a good half-hour sucked into her channel - no wonder she has 10m subscribers. The vlogs appeal to both children and adults, meaning parents can enjoy the toy too. It’s digital creativity at its finest, creating that feel-good togetherness that’s sought after all year round - but especially over the holidays.

One-third of kids between the ages of 8 and 12 aspire to be either a vlogger or a YouTuber, according to a recent survey conducted by Harris Polls and Lego, which proves the impact social stars have on the youngest generation. If you want to keep up with Gen Z, you’ve got to communicate to them their way. And Barbie has nailed it.