Report: more than half of Gen-Z consumers are influenced by social stars 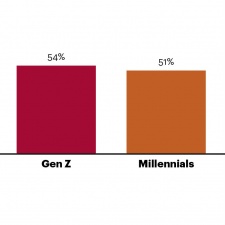 54% of 'Generation Z' consumers say that micro-influencers like vloggers and bloggers have some influence over them, according to a new report from consultancy firm A.T. Kearney.

(Want to feel really old? The report also defines the next generation of consumers, born in 2017 and after, as 'Alpha Gen'. Although they don't know about vloggers yet...)

The report's findings on the role played by micro-influencers for the various demographic groups shouldn't come as a surprise: the younger the group, the more influence they have.

While 54% of Gen Z said bloggers and vloggers have some influence over them, the figure fell to 51% for millennials and 35% of Generation X respondents to A.T. Kearney's survey.

The report predicts that micro-influencer marketing will continue its growth as brands continue to increase their spending on this segment.

"Tomorrow’s influencers are likely to be more segmented: for example, a blogger or vlogger (video blogger) with fashion sense, or a local rapper, DJ, or foodie," claimed the report.

How this influencer agency gets e-commerce brands seen beyond Amazon

The future of influencer marketing