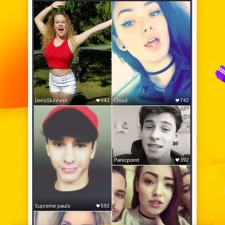 Livestreaming video app Live.me has attracted 35 million users and processed more than $6m of payments to them from viewers buying virtual gifts. Now it's launching a new app focused on short-form video.

It's called Cheez, and sits somewhere between Musical.ly and the (now-shuttered) Vine in its features. The app challenges people to upload viceos of up to 17 seconds in length, which are then shared within its community.

Cheez will have a musical feature called Dance Off, which gets people to replicate dance moves, as well as hashtag challenges and 'Battles' to encourage back-and-forth interaction between its users.

"Cheez provides a platform for all people to really show off who they are, whether that's by making funny videos, singing, dancing, or just sharing interesting moments from their everyday lives," said Live.me CEO Yuki He in a statement.

The company is already thinking about how it can help Cheeze makers (who are, presumably, blessed) earn money from their clips. The app will soon include a similar virtual gifting system to Live.me, for fans to reward the creators they like.

Many online influencers are already struggling to divide their time between the major apps and platforms, so any new app has its work cut out attracting social stars. That said, for anyone that's already built an audience on Live.me in particular, Cheez may be a logical app to experiment with.