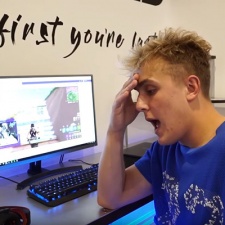 Having presumably seen the vast swathes of attention and cash heading the way of top Fortnite streamer Ninja, Jake Paul has decided he wants some of that action.

Paul has established a new ‘vlogging incubation team’ called Team 10 Gaming. For the time being it comprises of buddies Chance Sutton and Anthony Trujillo, both of whom are working out of a dedicated gaming and streaming room in Paul’s mansion.

Paul has already featured Fortnite in a couple of his own videos, including a recent one (that you can see below) where he gave what he proclaimed was the “biggest Twitch donation ever” to Sutton – a cool $100k. He then followed this up the next day with a $75k donation to Trujillo.

Slightly later in the video Paul reveals his ‘prank’ to the pair. Despite being a bit of a damp squib, there is a small window of amusement when you can see Sutton and Trujillo dying a little inside as they momentarily ponder the possibility of having to give the money back. Alas, however, Paul is happy to toss them the change.

Fortnite’s rapid ascendency was fuelled even further last week when Ninja was joined on stream by rapper Drake. It’s a subject that has also been touched upon by PewDiePie. He claimed in a recent video that his home internet is not sufficient to allow for good quality streaming, although he also confessed to being tired of the battle royale genre and lacking a real desire to get into Fortnite.

None of which stopped him titling the video ‘Drake Plays Fortnite’.

“You have these two things [Drake and Fortnite] and they just combine to turn into the biggest thing of all time,” PewDiePie said.

“And here I am being salty about it, but at least trying to benefit a little bit from the breadcrumbs that are left with a clickbait title that brings up this topic, without giving any real form of personal input or adding any real value to the conversation.”